Filibuster! I don't even know her! 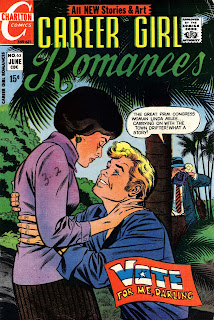 Whether you are looking for steaming hot romance, or are merely looking for career options, Charlton Comic's Career Girl Romances title comes through for us once again!

In Vote for Me, Darling we learn that there is nothing a bleeding-heart-liberal can't accomplish with an obsession and the right woman by his side.

The right woman you ask? Well for small town drifter Lew Cantrell that woman is Linda Miles. Obsession you ask? We'll get to that later. 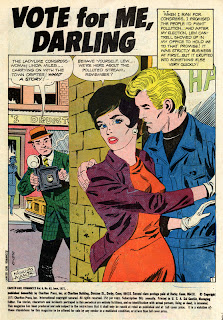 Oh ladylike Congresswoman Linda Miles, surely you know that romance for a politician isn't conduced on public streets. No, it's conducted from the Senate floor, brothels and in men's restroom.

Our story begins at the office/rustic home of Judge Stern (Judge to his friends).

But make no mistake, Judge Stern is not just an intimidating suit and impressive mustache, no. He is also a father-like figure to one Linda Miles, community college graduate and quite the looker. 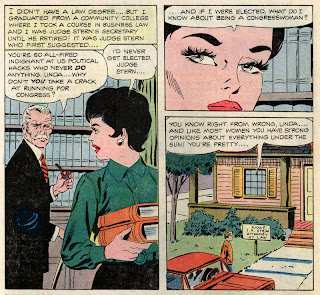 After Judge Stern's subtle attempt to push his baby-bird out of the nest and into the loving arm's of the American people ... 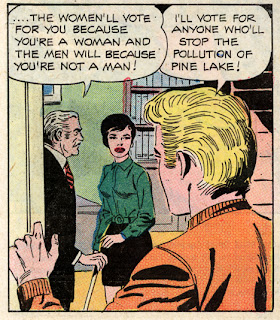 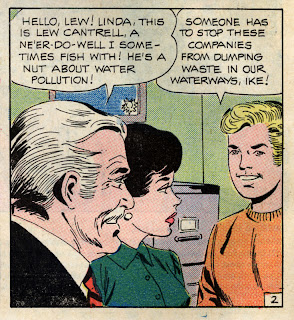 Is it just the orange shirt or does Lew look like Charles Nicholas and Vince Alascia's version of Aquaman? The obsession with waterways isn't helping.

With the Judge's gout bothering him, - Hey, I didn't write this. - The Judge asked Linda to let Lew show her what he is talking about. 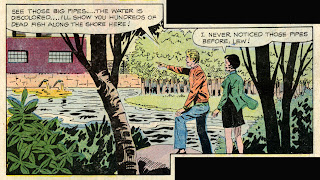 It would be so hot right now if he started talking to fish.

And like every man who is this good looking, he is able to completely change the course of another human beings life. 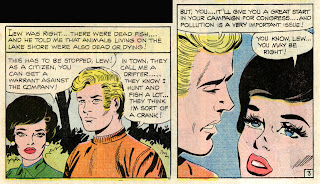 Of course he's right Linda! Have you seen how good looking he is?

So, with the help of Judge Stern, the ideals of the town drifter and her own good looks and natural charisma, Linda Miles goes into politics. 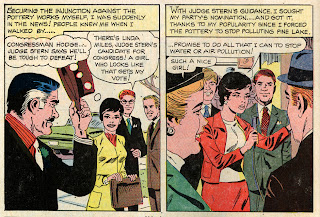 She's also good with sticking to a theme.

I'm not sure what the significance of the bus stop sign, but its placement makes me feel like I'm missing a double-entendre.


And Lew becomes an integral part of her campaign.

But when Linda wins her bid for election... 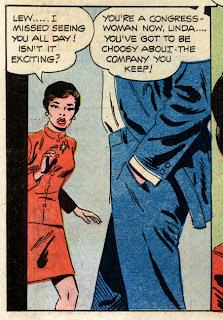 So, she can't be seen with her campaign manager?

And Linda starts to feel that without Lew, fighting for HIS cause isn't the same. 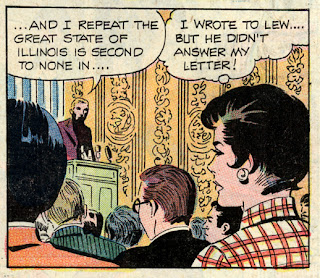 And like any woman with access to the nearly unlimited funds of the American people, she goes home to find her man. 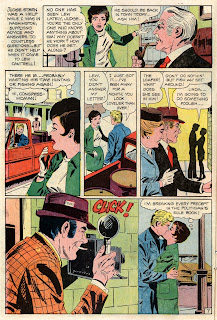 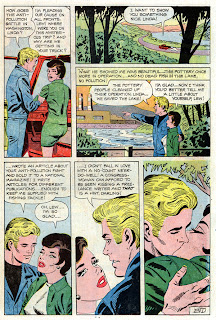 Yes, ladylike congresswoman Linda Miles, your man is not a loser. No doubt you'll live happily-ever-after.

For more information on running for political office ask your local librarian or your town drifter.

Posted by Spectergirl at 3:35 PM