Swinger Turned Square - It's not what you think. 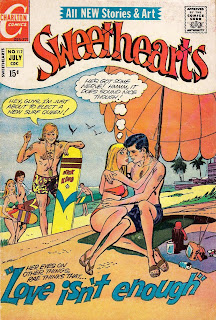 Okay, let me be honest. I totally picked this story for its title. Oh, and for the fact that the woman in green and white on the splash page looks like she is doing the robot. But that doesn't mean this story isn't fantastic! Of course it is. On As Told To Stan Lee we would have it no other way.

How did you spend your early twenties? If you were anything like me you spent your days between work and class and most nights in some smoky club with sticky floors and too loud music being hit on by men (and women) you could have no long-term interest in.

That is until the day you met that special someone. In my case it was when a cute art school student, with cool hair and kick-ass shoes (who had already been much discussed between me and my friends) handed me his phone number during his shift at the local music store. Who then, sporting a Robby the Robot t-shirt, brought over Forbidden Planet and Queen of Outer Space for our first date. What woman wouldn't love that? (Yeah, yeah, I was a cheap date but he was really cute. Not to mention he also showed sincere appreciation for my budding comic book collection.)

Well in "Swinger Turned Square" we meet Norma Barlow a young woman who takes her wild lifestyle a little too far. 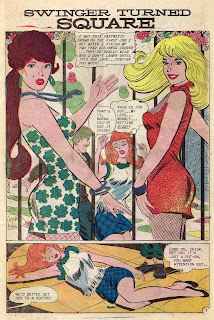 And by too far I mean forgetting to both eat and sleep. 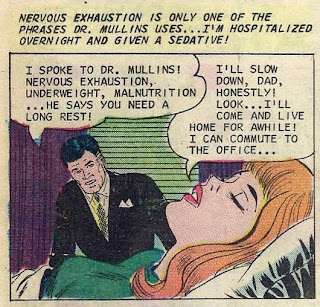 But her father wants his daughter healthy again and, calling upon all the dark forces at his disposal, summons a phantom hand to do his bidding and force his daughter to take time to truly recuperate. 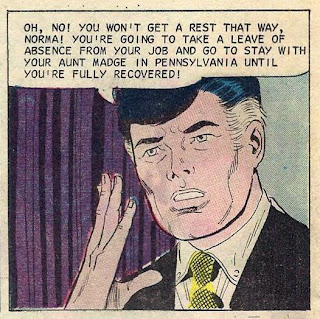 But Norma quickly agrees which makes the calling upon the devil's minions seem a little uncalled for. And soon they are on their way to to small town in Pennsylvania that Norma refers to as "Creepy". (Sounds exciting doesn't it?) 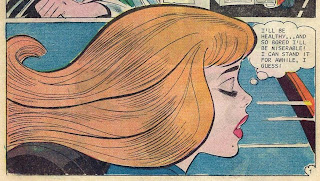 Now, Charlton Comics being a class act, then takes this opportunity to teach their readers a little bit about creepy, creepy Pennsylvania. 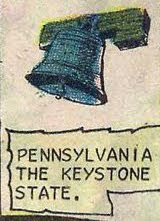 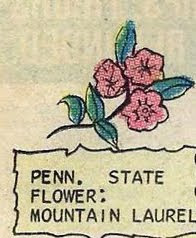 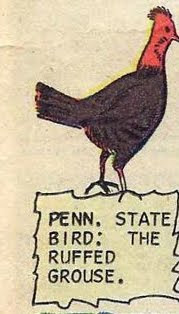 Who knew it could be so fun to learn about geography.

Once Norma arrives at her Aunt's house she does what any girl would in her situation. 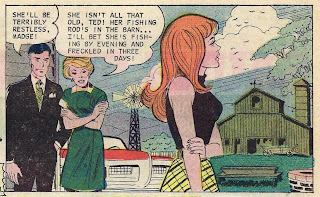 She fishes. A lot. And she enjoys it. 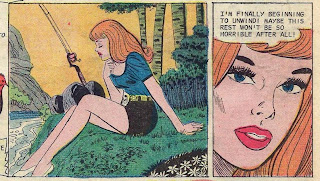 She not only enjoys it, she likes it so much she likes other people who like it. (Well I like fish, or at least blackened fish brought to me by a waiter, so it's kind of the same. ) 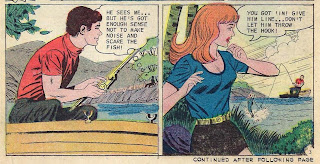 Apparently sensing a kindred spirit Lew Clines give Norma one of his standard pick-up lines. 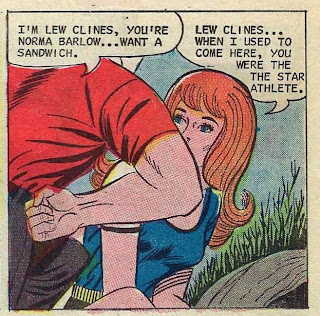 Now, Norma accepts the offer and breaks one of my own dating rules. Never, ever date someone who played football in high-school. They will inevitable have nothing going on for them afterword. 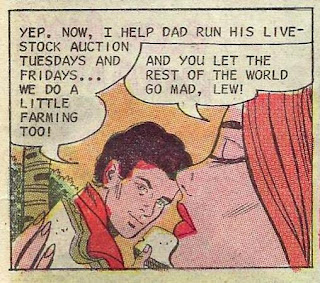 See, he just proved my point. 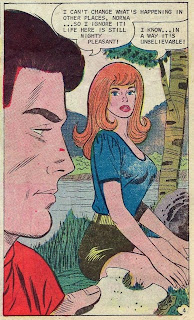 Anyway, after a conversation that makes you feel like you came into a movie 45 minutes late we get our happy ever after. 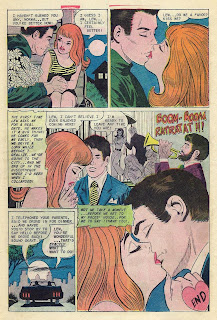 I guess.
Posted by Spectergirl at 9:10 PM