In a world that offers up men like Jonnie Love can there ever be any true justice?

Sometimes, to make it through another Godforsaken day, we have to believe that those Jonnie Love's out there will one day pay the price for their loathsome ways. That there will be, at least a little, retribution for the women left behind to pick up their shattered lives, and wash the dishes of their regret.

Jonnie Love needed to pay for his crimes against humanity. And, in some small way he did pay. After more than thirty appearances in a handful of Charlton titles, Jonnie Love finally, dare I say, got his comeuppance.

But, I can only assume that the judge was a woman. A woman not immune to his bearded charms. Why do I think this? Because of one thing, Jonnie Love, despite the trail of shattered lives he left in his wake, received the lightest sentence possible. Community Service. 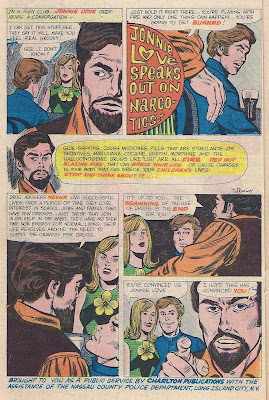 (published in Charlton Comics Career Girl Romances #48)
Damn you Jonnie Love, you irresistible bastard. We are all more in touch with our feminine desires for having known you.
Posted by Spectergirl at 9:45 PM