Statistically speaking flying is still the safest way to travel. 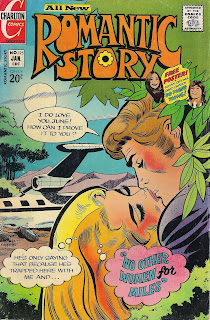 I know what you are thinking. You have been burned too many times before. Surely, surely this story could not be as awesome as this cover would lead you to believe.

But oh yes it is! Yes! Finally a fabulous comic book cover that is lame in comparison to the complete awesomeness inside. So let's not delay any longer.

What would you do if you found yourself stranded after the private plane you were flying in crashed? How would you spend those days as you waited to be rescue? Well, let's not get ahead of ourselves. 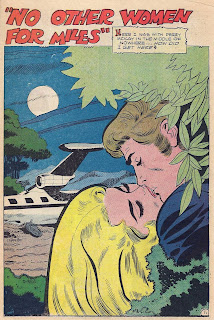 In "No Other Women For Miles" June Walton is a secretary for the Big 'Z' Corporation. One of several secretaries to the "Genius" behind the company's success. But Perry McKay knew exactly who she was and he told her breasts as much. Heck, I would have problems not addressing that chest. 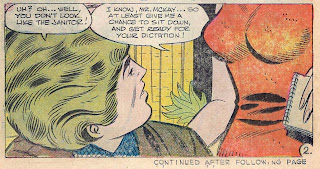 But in the whirlwind that IS big business, June is swept way on an impromptu business trip to New York City. 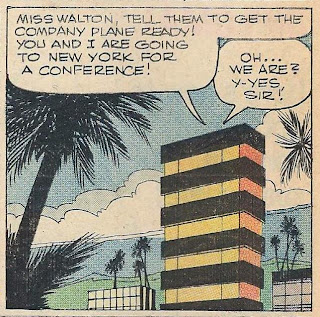 But the unthinkable happens. 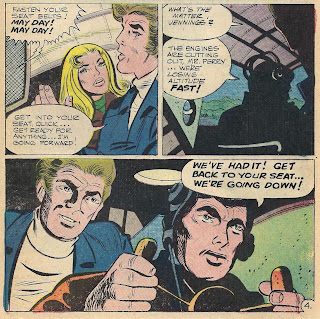 In the crash June and Perry come out without a scratch, but the pilot's leg is broken. What a lucky break for our would be lovers! (pun intended) Now they have all the time in the world to wander off together without that stick-in-the-mud Jennings cramping their style. And wandering off is far preferable to listening to Jennings crying "the pain is too much" and "oh God, I can't feel my leg anymore."

So again, we come to our earlier questions. What would you do if you survived a plane crash? How would you spend your days as you waited to be rescue? 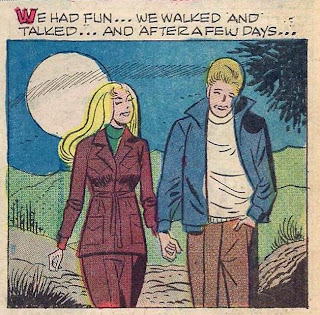 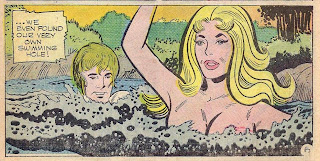 How about heavy petting? 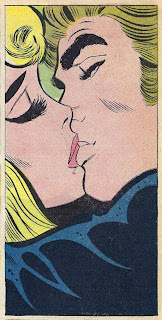 Of course, leave it to Jennings to try and ruin everyone else's good time. 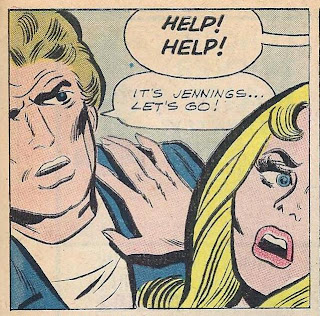 I'd have a good mind not to answer those pleading cries for help. Of course then our story wouldn't get even greater.

Greater you ask? Yes with a BEAR ATTACK! 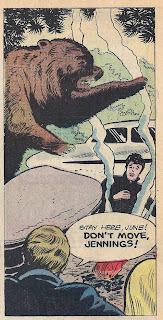 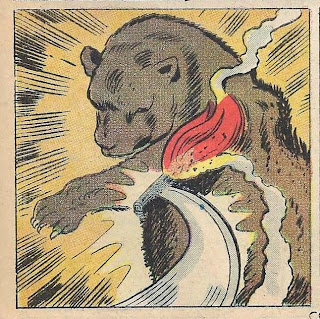 Could this be the same bear from "Non' but a Brave" still bitter at having missed his chance to eat two hamburgers and a milkshake, if only secondhand? Well, the same bear or not, we have to assume that bears are to Charlton what buggery is to Vertigo.

But we Charlton readers are here for the romance, so, despite all of Jennings' drama, we still get our happy ending. 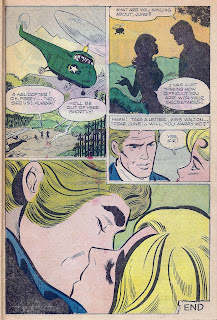 If only more marriage proposals could be so groovy.
Posted by Spectergirl at 10:30 PM