Jonnie Love - Will your reign of terror NEVER end?! 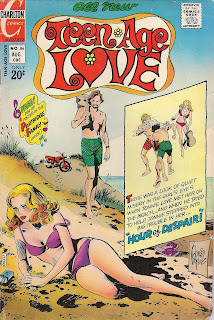 You all know the type. He lies in wait for girls in anguish. Girls fragile from a recent breakup or other self-esteem destroying experience.

He is the guy who offers ONLY a shoulder to cry on, but it inexplicably goes a little further than planned. He is the someone "accidentally" stumbled across when a pleasant tumble in the sheets might make things feel just a little better. He is the planner. The lurker. Waiting with his closely-trimmed Van Dyke for the opportune time to strike.

He has no decency. He has no moral code, at least not one that says "don't sleep with a drunk girl". He is the REBOUND GUY.

He is Jonnie Love, a man with no shame.

In "Hour of Despair" we once again find Jonnie Love in the market for an easy score and hungry for a medium-rare steak. When he comes across beautiful and fragile Anne Talbot he knows one thing and one thing only, he is going to tap that.

Pulling out one of his signature moves Jonnie Love makes easy work of our despairing young damsel with music pulled from the devil's own playlist. 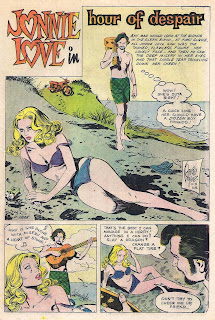 It takes little more than a quickly composed ballad to gain the trust of the innocent Anne Talbot and soon her whole sorrowful story comes spilling out. 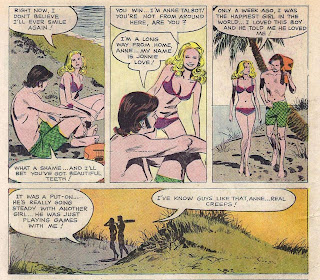 With Anne still crushed by Mitch falling in love with another (something I am sure pained poor Mitch as much as it pained her) Jonnie sees an opportunity to increase Anne's attachment to him and they "accidentally" run into her old flame. 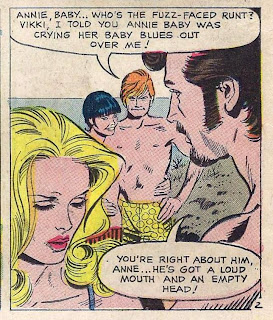 Mitch takes an instant dislike to Jonnie, as so many do, with their jealously of his masterful grooming and intoxicating pheromones. And things soon become violent. 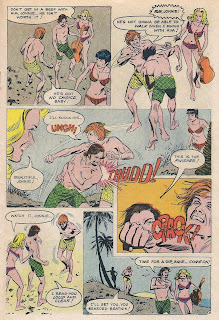 And still on a high from having the bearded Romeo fight for her, Anne finally gives Jonnie a little of what he is after.
A bit of action. 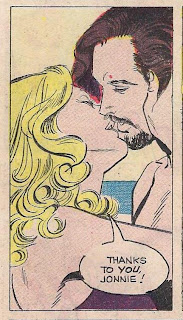 And, after changing into his "getting lucky" clothes, a nice steak. 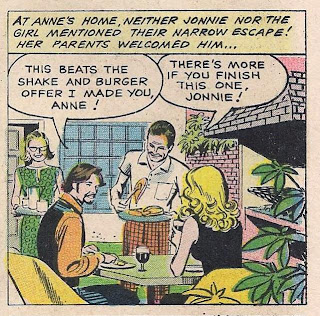 Just as Jonnie is thinking about splitting the scene and escaping anymore of those "deep conversations" with Anne, her mother has to stick her nose where Jonnie certainly would prefer it wasn't. In his damn business. 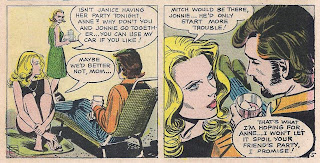 But never one to avoid a chance to beat an innocent man or a chance to score with another chick, Jonnie agrees to go.

At the party Mitch is both shocked and a little scared to see that Jonnie is there. That is until Jonnie takes him off his guard with what Mitch takes as a sincere apology. 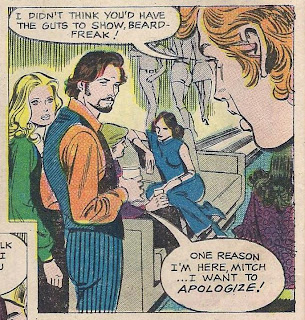 But as always Jonnie's way is cruel and unexpected. 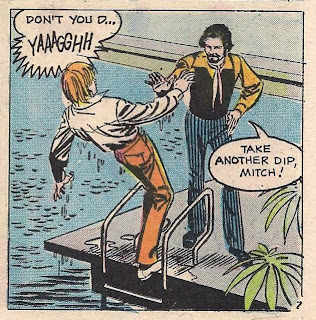 Truly frightened now, Mitch tells Jonnie he will not try to stop him from taking advantage of poor Anne. But Jonnie doesn't fall for that, he's done this too many time before.
Taking Anne home Jonnie tries for one last kiss before repeating the same false promises he's spoken for so many years, to so many different women. And then it is back on the road. 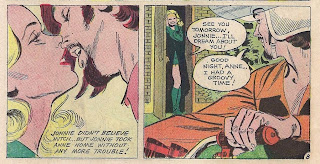 But, not for the first time, Jonnie has another run in with a mislead protector of the innocent. But this game is an old one to Jonnie Love. 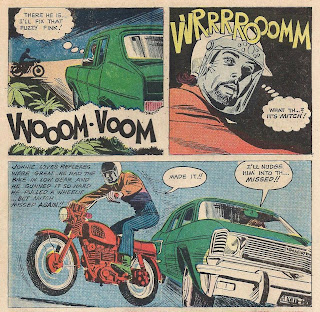 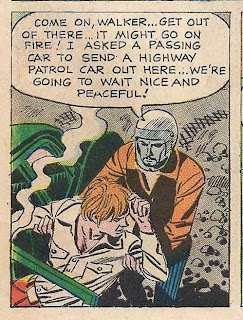 Again Jonnie finds himself pulled back into the drama of Anne Talbot, a drama of which he has had his fill. But Jonnie is nothing if not adaptable, beside, Mrs. Talbot looked like she could use some comforting too. 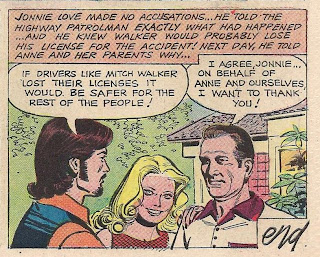 Will Jonnie Love ever pay for his crimes to humanity?
Find out tomorrow when I bring you
the last chapter in the Jonnie Love saga.
Posted by Spectergirl at 10:25 PM