First Impressions - Comics I just had to buy.

With my husband working nights again I decided to do a quick search through my ever growing romance comic collection for something to post and quite frankly I just couldn't decide. There were just way too many covers that sold me on the book before I even opened its pages.

First impressions are everything. And that is doubly true for romance.

It. Is. Everything. I can not stress that enough.

I remember once meeting the mother of a man I was dating only to have her eyes rake me from tights to t-shirt and say "So, how old is she?" A question she didn't even both to direct to me. Perhaps I should have upgraded my jean cut offs for a skirt or something because she, obviously, was not impressed. And I'm awesome!

My husband once threw-up on a first date. Yep, and he wasn't even drunk! Did he get a second date? I don't remember for sure, but I am guessing no.

Then of course, coming at it from the other side, I once had a guy try to pick me up at a club who had, no more than three weeks early, tried for 20 minutes to grope me in a mosh pit and was saved only by the fact that eventually some gigantic would-be-viking man decided that I fell under his protection. Was I not supposed to remember that? Well I did. Woman remember EVERYTHING.

Good or bad, you only have one shot at a first impressions. Just like in life, a comic also has only moments to sell you on it value. In my opinion, the following did their job. And did it well. 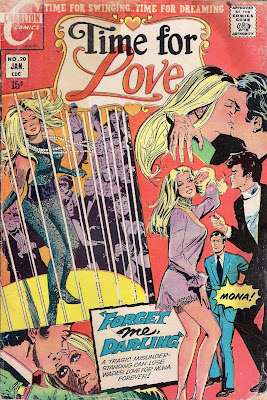 (Time For Love #20, 1972. Cover artist unknown)
I'm not sure what the misunderstanding is but if it involves cage dancing, I'm in! 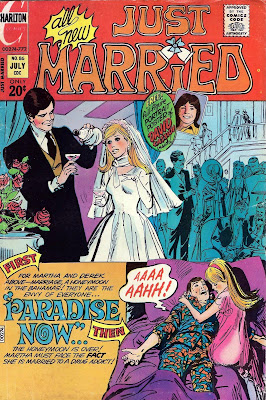 I like how her husband's thrown out arm, with its pushed up sleeve, imply that the guy must shoot up with heroine or something. I'll let you in on a little secret ... it's LSD. 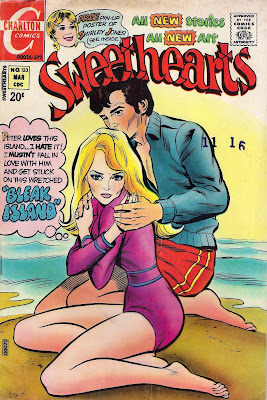 We all know how much woman hate a man who has an island! This cover makes me what to buy it AND feed that woman a sandwich. 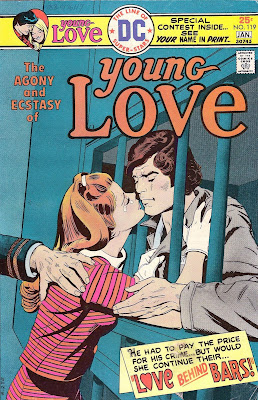 I hope when one of my sons goes to prison (because there's no doubt really) that they have a good woman to love them. 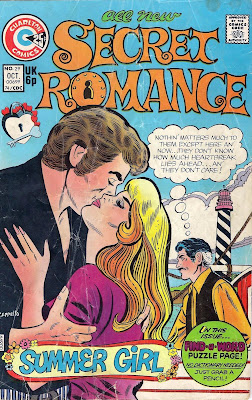 I'm just plain drawn to the gentleman with graying hair who seems to be having a rather elaborate internal dialog about that couple making out in public. What does he know that we don't? 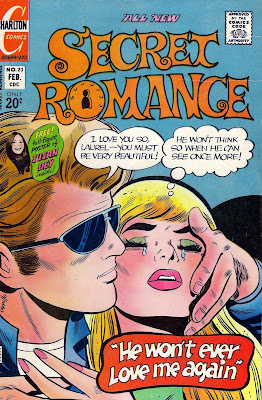 I think the blind, even the temporarily blind, should be more often represented in comics. 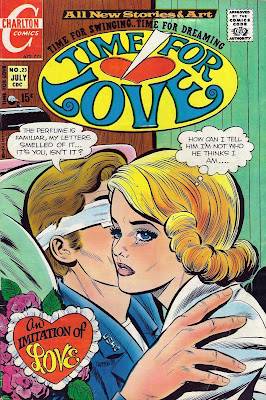 Like a dream come true. Another blind guy. Apparently women with low self-esteem love to score with the visually impaired. 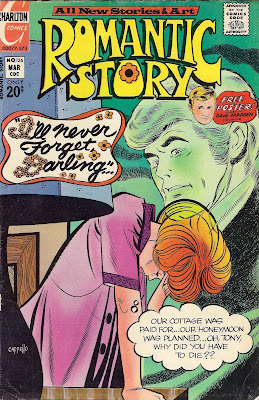 (Romantic Story # 126, 1973. Cover artist by Art Cappello)
If he can't be blind, he can at least be dead. She seems more upset that she already paid for the honeymoon than she does that her man is dead. Just to prove that I'm right, I'll let you know she hooks up before the end of the trip.

Now, aren't you just dying for me to post these stories? I thought so.
Posted by Spectergirl at 11:47 PM