Nothing is as romantic as a stalker love story! 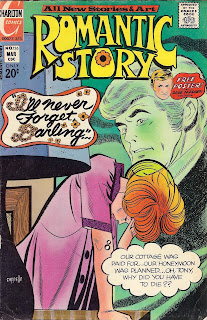 Before you worry yourself about what nightmare inducing images might be found in this stalker story you should know that there are actually three kinds of stalkers, and not all scenarios end with you chained in a disused bomb shelter secreted under an above ground swimming pool.

Type One: The kind that creepily watch you, stages accidental run ins and eventually kills you or tries to kill someone to impress you.

Type Two: The kind that creepily watches you, stages accidental run ins and eventually is found in your closet trying on your clothes and you are forced to call the police.

Type Three: The kind that creepily watches you, stages accidental run ins and you inexplicably end up spending the weekend dancing with them in a gay club in Southern Ohio, crashing in the same hotel room with a little voice in your head telling you that it probably isn't the best idea to share the same same bed with them no matter how casual or numerous her offers, so instead stay awake as long as you can by watching People Under the Stairs a little concerned that you might be awoken in a previously unplanned manner.

I am most intimately familiar with type three and feel secure in saying that this story falls safely somewhere between the last two.

Before we begin I just have to say that I totally want this first outfit. If that yellow raincoat and those boots are shiny plastic or patent leather (my personal kryptonite) I am SO there.

Anyway, with To Walk Alone we meet Tracy Rankin a recently jilted city girl with a fab scents of style and the legs to pull of a killer pair of boots. We can only guess that Arther, her previous fiance, realized he was gay. I mean look at her. Assuming she isn't stupid even I'd hit that! 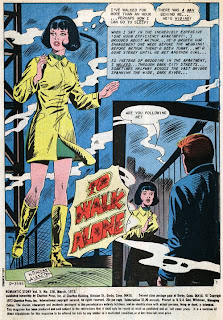 Rule number one: When you think you are being followed please don't take the time to ask. So maybe she is kind of stupid but still you can't have everything. 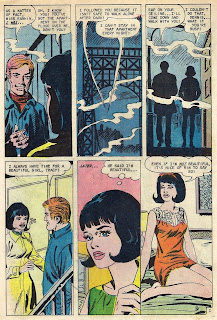 But even though Dennis tells her she is beautiful, a compliment she soaks up like a Bounty Paper Towel, the following evening she heads out alone again.

Like any stalker worth his salt, Dennis is waiting for her outside. 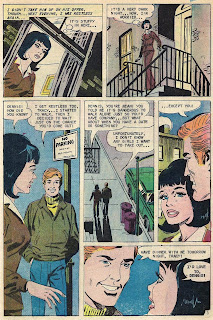 And, even though Dennis is obviously a TOTAL stalker, Tracy agrees to go out with him. I guess we shouldn't be too hard on her. Dennis is a red head, and, as a fake red head (most days) since I was seventeen, I can assure you we are irresistible.

Dennis takes Tracy to a nice restaurant and the dates goes wonderfully. In fact in goes better than all the dates he had ever fantasized about while weaving potholders from the hair he secretly collected from her hair brush. 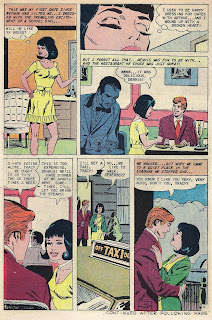 Okay, Jonnie Love leads me to believe that in 1973 steaks could only be afforded by the very rich. Does Tracy think money grows on trees? I don't know how much this stalker gig pays, but I don't think she should assume it pays steak money.

Dinner at Tracy's house seems to go even better. It goes well enough that Dennis feels it is time to tell Tracy that he loves her. Oddly Tracy's tears are not because she is afraid he is going to kill her and wear her skin as a suit. 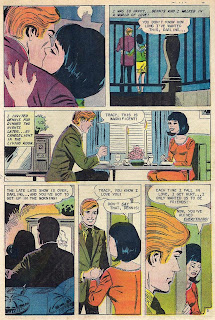 Wow, Dennis's timing could not have been better. Rebound girl is CRAZY! 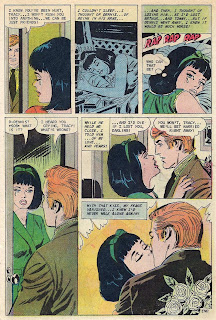 Wow, that relationship moved even faster than the relationship between me and my husband. I may have been the stalker in that scenario but he was first with the I love you.