There is Always Time for Workplace Romance! 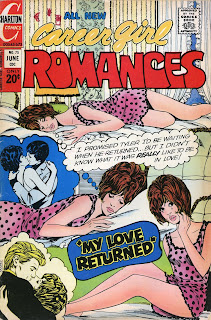 I have a confession. I've never dated someone I met through work *gasp* but Career Girl Romances leads me to believe that if you were so inclined you'd be hard pressed to throw a stapler without hitting a would be lover.

In fact a friend of mine once claimed to have met the man of his dreams at "the office". He worked at one of those 900 numbers and was always trying to get everyone else to join up because the pay was okay and it "was a fun place to meet other people". Assuming you wanted to meet other people who had the same terrible job you did.

Of course that totally didn't happen because the outcome would have inevitably been a bad one. Lonely Pervert: Hi, how are you doing? Me: Been better. Lonely Pervert: What are you wearing? Me: A Welcome Funeral Directors T-Shirt and men's wing tips I got at the thrift store for $3. Isn't that a bargain?! Lonely Pervert: Um ... Can I talk to someone else? (No offense to the lonely or perverted. Only the lonely and perverted willing to spend $4.99 per minute.)

So perhaps I just missed my workplace affair window. Unless of course you would count the guy who was always trying to corner me alone in the dressing rooms after closing when I worked retail, a writer for the newspaper I freelanced for that said he'd "really find me attractive if I didn't dress so weird." (Okay, if you don't appreciate Fall of the House of Usher chic why are even bothering me?) or the strange man who, after a short conversation about his cable bill when I worked at a customer service call center, went on to explain, in a deeply seductive voice, every detail of how he wanted to drive to my house, sneak inside, feel the side of my oven still warm from where (he hoped) I had been baking, quietly open its door, pull the racks free and climb inside. (God I miss that job!)

Yeah, didn't think they counted either.

"Beware, My Love" is a short story that shows us just how easy it is to find true love at the office. Even while dressed like you're in a barbershop quartet.

When the attractive Derek Ames walks into Lila Cooper waiting room she can't help but like him. Firstly, he wears a tie and all women like ties on some level (probably because it is kind of like a leash), he sports a black shirt like he is in the mob (it's that bad boy thing again) and he asked her to lunch even though she is dressed like a carnie. 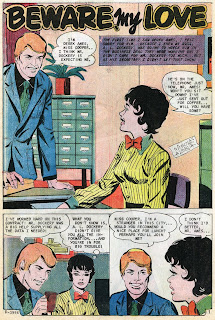 Despite the fact that Miss Cooper has probably let hundred, if not thousands, of unsuspecting men into her bosses office to be screwed over, and good, this time, with Derek Ames' resent kindness fresh in her memory, Lila feel true remorse. 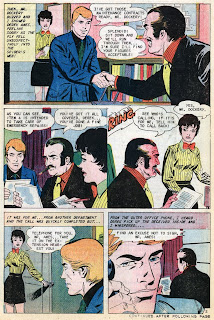 After tipping Ames off and suggesting he does not sign the contract, Derek, not great at improve, makes an awkward exist and Lila's boss becomes belligerent. 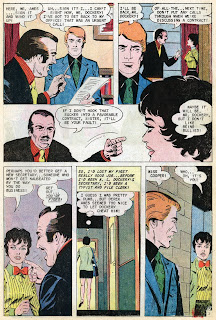 Derek asks Lila to lunch once again hoping she will explain why he shouldn't have signed the contract. And this time, slipping on a jacked that helps her to look less carnie and more Mary Poppens, Lila accepts. 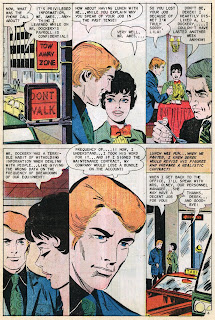 I like the crows feet on Derek's eyes. If those were on a female the story would inevitably be about being too old to love.


When they part ways after lunch Lila has high hopes for both a new job and more time with Derek. 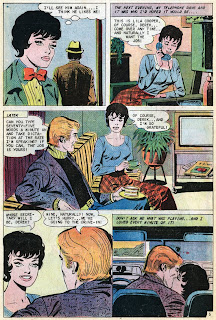 Drive-In! At this rate she'll be able to quit that new job any day now! 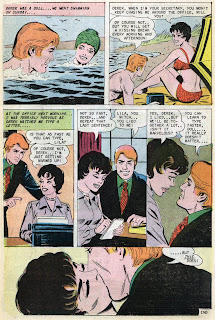 Lets hope Lila is a WAY better kisser than a typist because that could really lead to an uncomfortable yearly review.
Posted by Spectergirl at 11:33 PM