In the interest of equal time 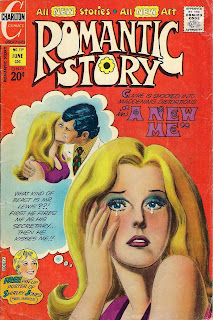 Okay, so last week I posted a story from Charlton's Cowboy Love. I think it was a good example of the bright spots in the art and story telling that came out of the Charlton camp. Well, in the interest of equal time, I thought it might be nice to enjoy a little bit of the very plentiful other extreme. Now it's time for a little Indian Love.

In Non' But a Brave we meet Jan, an apparently very popular Southern California girl taking a bus trip with friends to see the wilds of Yellowstone National Park.

The bus trip is apparently not all she had hoped it would be. And a charming Kenneth notices her change in mood. 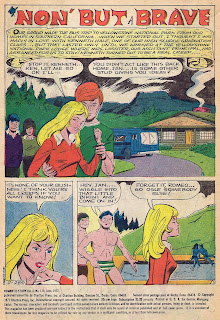 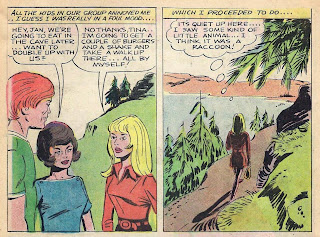 Once Jan finishes eating the large meal in hopes of dulling her pain, she decides to head back to the others. But she runs into trouble.

But, with the speed that only two hamburgers and a milkshake can give you, she escapes the bear unharmed.

But to her dismay, in the process she becomse terribly lost. After wandering for hours she seems to just be moving further and further from the camp. Then, just as darkness starts to fall, she runs into a man with a bow, headband and vest and jumps to the conclusion anybody visiting Yellowstone National Park in 1972 would jump to. 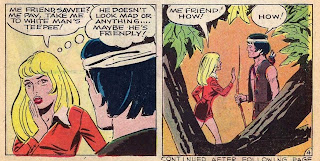 Despite her limited "Indian" and the fact that she seems to fight all his efforts, the Native American gets her meaning and manages to get her back to camp before she is eaten by wolves or something.

Once they arrive back at camp, the language barrier again seems to get in the way. 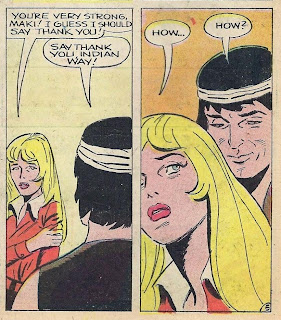 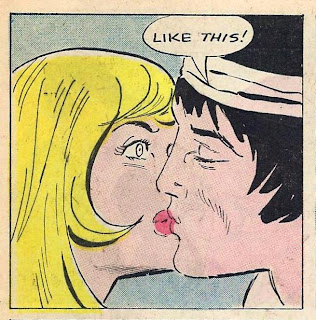 But can romance really bloom between two people from two different worlds that don't even speak the same language? 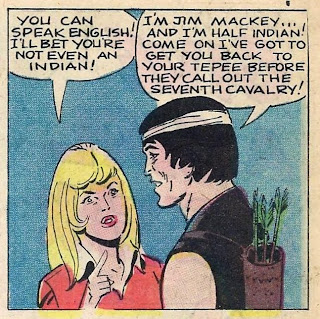 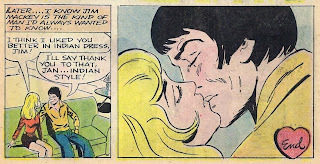 Posted by Spectergirl at 9:29 PM