Artist in a shack trumps business man in a mansion any day. 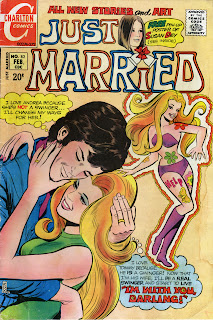 When my husband and I first got married he moved from the apartment he had shared with a revolving door of guys and gals to my apartment just up the street. An apartment he had heroically been helping me pay for since by roommate Andrea had abandoned me without any notice.

Less then an year later we moved to a double in the ghetto. And oh how I miss it!

Our landlord, an engineer who looked like the resulting love child from a union between Sam Elliott and Rob Zombie, and his belly dancers/hair dresser wife, lived in the other half with six golden retrievers that sound like a herd of elephants when they ran up their steps. Otherwise you never heard anything at all which says something about the volume of six giant dogs running up the stairs.

We paid $450 a month when it was almost impossible to find rent under $850.  True, we had to share a backyard with six dogs, but we had one of our own so we didn't really care. I have always been a dog person and am convinced to this day that every dog I see a good dog. See that dog? He is so cute. I bet he's a good dog! Yes he is.  Except for my own. In Vincent's case, I know better.

In that neighborhood my convertible had its tires slashed and its top cut in an attempt to still my radio which was a shit radio so I really don't get it. Aaron witnessed an attempted vehicular homicide and our landlord had his brand new truck stolen. But even with all this, it wasn't until shirtless-tattooed-skinhead-guy set fire to shirtless-mullet-guy's car while he was in jail because shirtless-mullet-guy kept peeking in the window at shirtless-tattooed-skinhead-guy's girlfriend and whispering creepy things to her, that we finally decided we needed to move.

Now I have always genuinely loved Just Married's story Love in a Garrett and I suspect you will too!  In it we meet Kim and Roger, a young married couple, who are struggling to improve their lives. But tragedy strikes even as Roger can see the Groovy at the end of the tunnel. 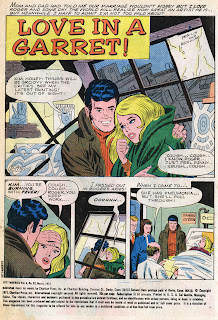 With Kim having fallen ill, her parents blame Roger. 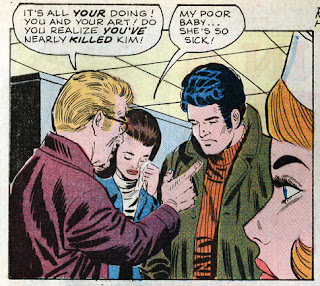 And when Kim is set to go home,instead of Roger picking her up, his guilt has her receiving a letter saying goodbye. 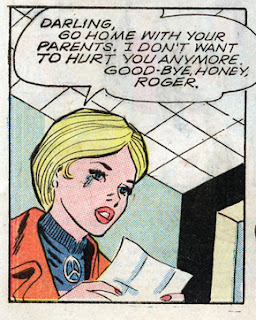 When Kim goes looking for him at their old home, the place has been condemned as the complete deathtrap that it was. 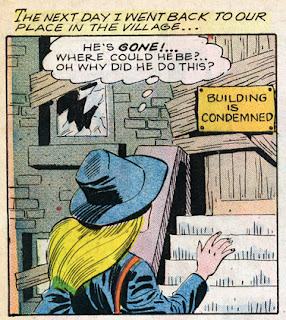 And none of their hippie, deadbeat friends can help either. (Interesting side note: Blogger does not recognize "hippie" as a real word.) 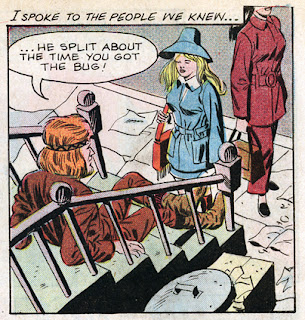 Her father is not very understanding. (Interesting side note: Kim's mother is rather well maintained.) 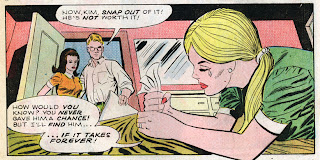 I'd like the say here that ALL father's feel that no one is good enough for their daughters. When I told my parents I was marrying my husband my father just kept asked me if I was really sure and then told me how he felt we should keep out finances separate. And my dad actually really liked him! My mother just said she was happy it was a boy.

Months go by and still no Roger. Until ... 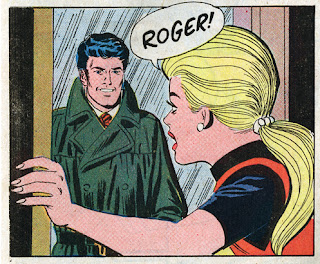 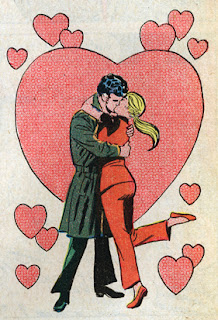 And for some unidentifiable reason, Roger seems to have gotten more attractive. I just can put my finger one it. 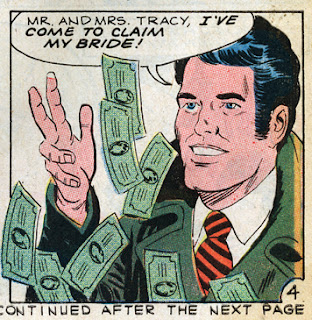 Roger explains to Kim and her parents what he has spent the last six months doing. And Roger says the words that very father-in-law to an artist wants to hear. 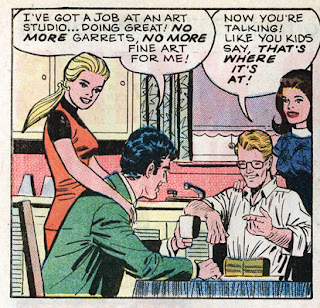 No more fine art for me!

Then Kim and Roger make the mistake we all do. 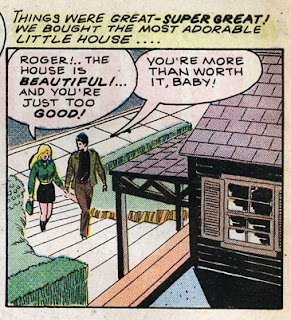 Much like in a horror movie, you just felt like yelling at the panel and telling them not to do it didn't you?

Kim and Roger's life seems perfect. Kind of like the Brady Bunch without all those damn kids. 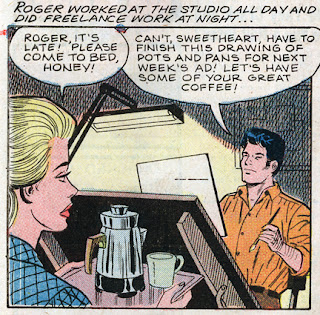 Then they make yet another one of those mistakes we all do. 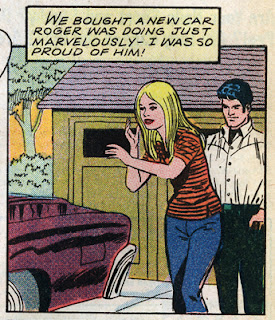 
But striving for that "perfect life" was taking its toll. 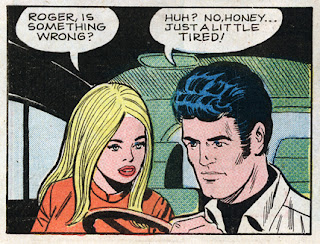 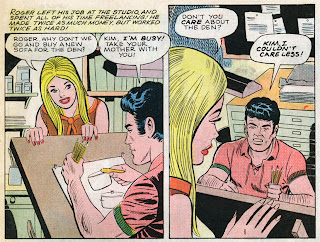 And as expected, the perfect life becomes less enjoyable then the life they were leading before. Excluding the whole pneumonia thing of course. 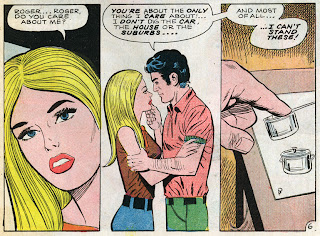 And then Kim does what I constantly fantasize about. Well, one of the things anyway. 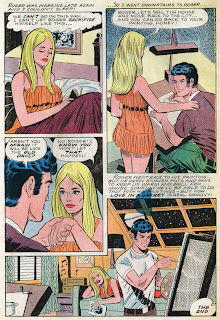 You always hear He Who Dies with the Most Stuff Wins but you're still dead. So remember kids, quality of life is more important then quantity of stuff so pay attention!
Posted by Spectergirl at 12:39 PM