It's not the size of the vessel, it's the motion of the ocean. 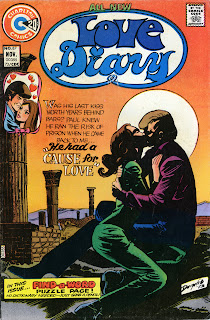 There are four words that are a MUST to keep in mind in any long-term relationship. Those words are accept, ignore, indulge and complain. Of course the complicated part isn't remembering the words so much as figuring out where to apply them. Sorry, that's your job, I can't do everything for you. So, good luck with that.

Here is an example: My husband accepts my never dying love of the Dynamite Hack 2000 release Superfast. I just don't care enough about this to make the effort to show you that I care enough to try to get you back in bed with me. He ignores the fact that I am a rather terrible cook. Terrible might be an exaggeration. I just sort of suck. He indulges me in my need to constantly be reading a book. It's good for the mind! Well perhaps not with the crap I've been reading as of late. And he complains that I seem just a little too interested in Gerard Butler movies. Have you seen RocknRolla? It's a great movie. The fact that Gerard Butler a aesthetically pleasing is completely incidental.

I, on the other hand accept that my husband likes Frank Senatra. That's why the lady is a tramp. Really? That's why? I ignore the fact that he puts my multi-colored dishes in rainbow order after I put them away. OCD much? I indulge him in his bizarre revolving obsessions. Vikings, Pirates, Mythology etc. And I complain that he complains about the Gerard Butler movies.

Well currently I am indulging my husband in a new obsessions. But this isn't part of his typical yearly cycle. This is a new one. It's about sailors. It is not as potentially sexy as it sounds. It has currently manifested itself in his reading of Moby Dick, continually talking about dirty lyrics of something called Barnacle Bill the Sailor, questioning me on my willingness to live on a boat, hell yes! trying to get a library DVD of Jaws and sitting around with a book on sailor's knots and practicing with a rope. Okay, this has a little more potential.

Add all this to the fact that we just got back from spending a week on a beach certainly the event that has spurred Aaron's current interest and that we always sleep with one of those alarm clocks that makes the sound of the ocean, sailors are currently never very far from my mind either. But were they ever? So today I am bring Love Diary's story His First Mate. 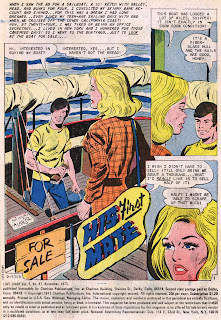 This is very much like a plot of some seventies sitcom. In another episode due to some contrived complication they are forced to stay all night in a department store with a severely effeminate store clerk and we are forced to suffer through much bad double entendre. 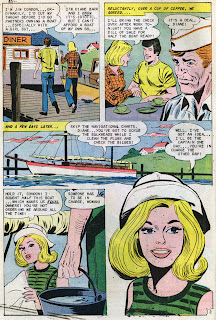 Someone has to be in charge, woman! Wow, I think my heart just sped up. 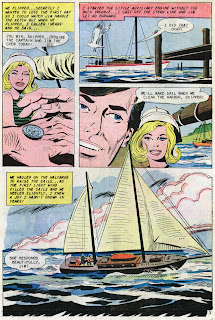 Just because you have an ugly hat doesn't mean you can be a captain. It didn't sound to me like she had been on a boat since she was a kid. This idea just seems to be getting worse and worse. 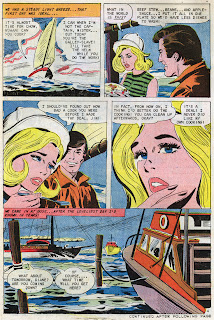 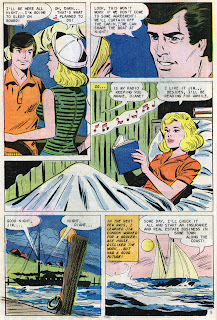 Assuming one or the other isn't a rapist, this sleeping on the boat thing could really save them some phat cash. 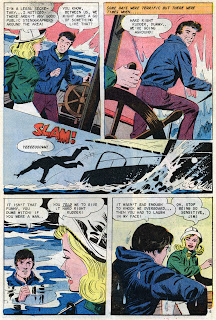 Wow, a man soaked to the skin AND without a sense of humor. I'm surprised she doesn't jump him right there. 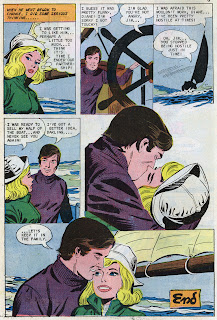 Remember girls, only say yes to a marriage proposal when the guy stops being hostile just in time.

I sometimes think Chartlon was on crack.
Posted by Spectergirl at 3:26 PM