When is a Rebound not a Rebound? 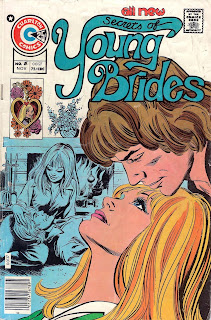 "Can This Be Love?"
Secrets of Young Brides
Charlton Comics
Story Art by Enrique Nieto
Number 3
1975

Well my minions, today's love lesson is on the traditionally suckie rebound relationship. If you've never had one, you can assume you must be in one now and your current relationship will end in tragedy. (Of course my husband has informed me that he has never had one. I'm already packing my bags.)

I personally have only every had one relationship that I would label a rebound. The fact that we were BOTH rebounding seems to have made the end inevitable. In what seems like a common pattern to my dating years, it was with a new clerk in a shop I frequented. (I guess I have just always had a thing for a man with a job.) After a few polite date declines (I knew even then it wasn't a great idea.) I eventually gave in. (We're talking short choppy burgundy dyed hair, ink and dimples when he smiled. I'm only human!)

In true rebound form we hit it off wonderfully but the fact that we still had some major unresolved issue from the past had the relationship abruptly ending after a few weeks. (months?)

So-called "experts" say that a rebound relationship is not necessary destined to fail, assuming you know how to manage it. The key being moving slowly. Well apparently who ever wrote this story knew their shit. We are talking romance at a slow crawl.

Before we begin, I wanted to say that while you might be more familiar with Enrique Neito's horror work, I surprisingly enough really dig the art in this story. I think mainly because the textures totally makes me think of a hand-me-down set of Fashion Plates I got from my Aunt when I was little. If you don't know what I'm talking about, you totally missed out.

In Can This Be Love? we meet a very hot Nick Curtis and the far less hot Charlene something or other. (We don't really care about her.) On a flight from New York to Florida, Nick Cheek-Bones Curtis has himself a seat next to Charlene, a blonde with no appreciation for facial hair and a frightening ugly shirt. (I won't even go into the horrid seventies kindergarten teacher hair cut.)

She's also kind of a bitch. 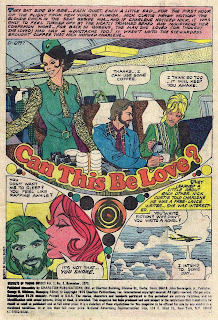 After some polite conversation on the plane, (Was that so hard Charlene?!) they make some loose plans to go out to dinner sometime while they both are in town. 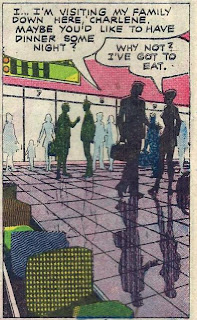 But, while they agree, neither one is really in the market for a new relationship.

When, later at the beach, Nick realizes that none of the chicks turn him on, he finds his thoughts going back to Charlene. And decides to call and schedule that dinner. 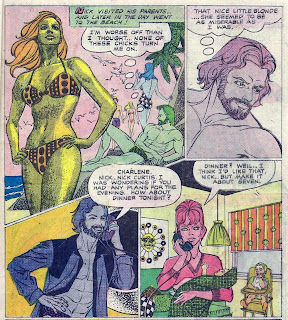 Who are these kids?

Charlene agrees and, in the market for a relationship or not, chooses to wear a shirt most definitely purchase from a stripper/clown store.

Oddly, while Nick is a proud owner of a penis, he does not go screaming at the site his date and children in the same room. (Ladies! I think Nick Curtis just got hotter.) 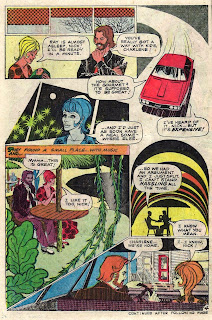 The date goes well but at the end of the night Nick finds his old relationship holding him back.

She must be using double-stick tape. How else could she possibly stay inside that shirt?

And that night they both are haunted by their pasts.

Why do I feel like Charlene's ex is about to tie her to a train track?

As their relationship progresses, Charlene finds herself unable to move forward with so much emotional baggage. 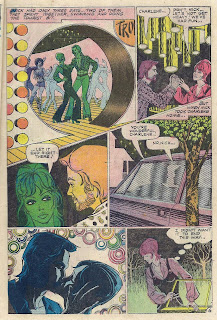 But while traveling home she can't help but think of Nick.

\
Despite all my talk, I really do find sweet guys a lot hotter than bad boys.

And when Nick returns to New York... 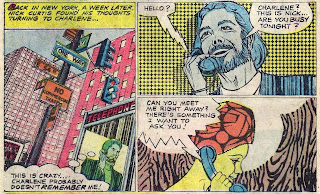 With enough time, Charlene finds herself excited to see Nick again. And, taking it painfully slow, they both find they have made it past the pasts. 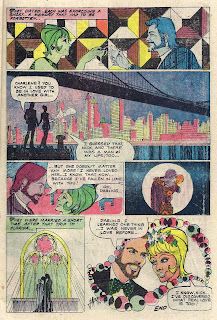 And, you know, you always see attractive woman with far less attractive men. It is nice to see it the other way around for a change.
Posted by Spectergirl at 11:35 PM