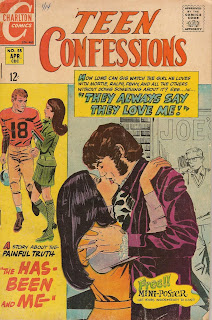 I have always had a weakness for smart men. In fact there is really nothing as attractive as a guy with brains. Now, I'm not talking about those men who like to think they're smarter than you are (I've never met one that was.) and feel the need to always be teaching you something important at every turn. (Ugh!) I'm talking the truly intelligent. Of course, with smart men, you will likely have to over look a twelve-sided die at some point, but nothing is impossible if you really put your mind to it.

My own darling husband has an IQ in something like the 160's but luckily he seems to use it from nothing more obnoxious than a nearly photographic memory of comics and an ability to recall all of the of words to 80's rap, (This is the 80's and Loc is down with the ladies.) Okay, so maybe that is a little obnoxious.

Charlton Comics, with its obvious understanding of Isaac Asimov's Spock is Dreamy hypothesis, bring us a tale of bad boys, smart men and a lot of fist-to-cuts. Sweet!

In They Always Say They Love Me we are thrown into the middle of a would be love-triangle already in progress.

Tina is a high school girl with a weakness for the velvet Nehru jacket/poet shirt wearing bad boy type. (Did I mention of mutton chops?) And, as you well know, nothing good can come of that. 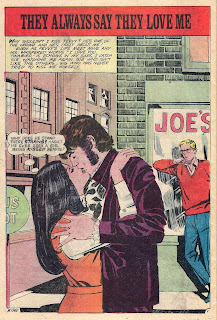 Surprisingly, Tina finds Gig's watching her kissing her boyfriend a distraction instead of the total turn-on that is should be.

Fevvy, sensing his chick's discomfort, is forced to kick his ass. All with his strangely dress and bearded lackey there to watch 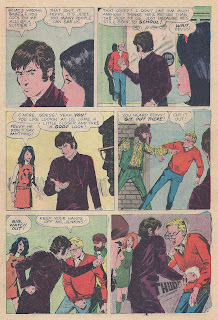 Tina puts a stop to the beating and, angry at her man for punching Gig, creepy voyeur or no, refuses to leave with him. Needless to say, Fevvy doesn't take it well. 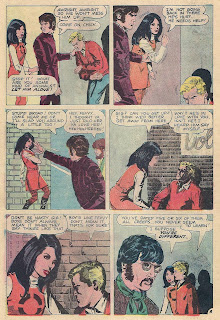 I don't know about you, in my experience men who say they are different are normally worse.
While Gig walks Tina home they talk about Tina's dwindling interest in school and Gig tries to convince Tina not to drop out. 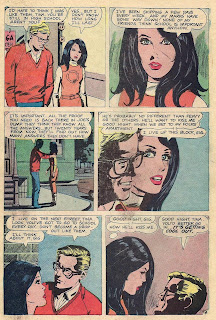 Now He'll Kiss Me. What an ego.

Gig's talk seems to have really had an affect on Tina. And that night she does some heavy reflecting. And the next morning she decides to try and turn her life around. 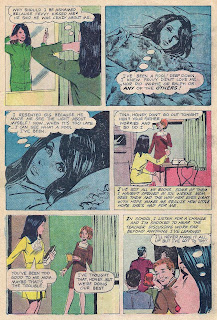 Fevvy, Mortie, Ralph and any of the others? ... damn girl, you're still in high school. You need to pace yourself.

Later Tina has a run in with Fevvy and his gang of drop-out- hipster-dumbasses before heading home to study. 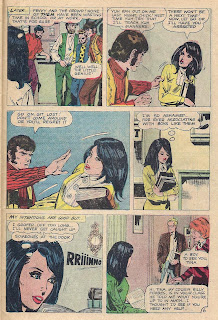 Wow, Gig's timing is so perfect it almost seems planned out. I believe Gig is even smarter than we suspected.
Showing up in a tweed jacket and his Clark Kent glasses, like every girl's fantasy, Gig helps Tina with her math. (Perhaps if I had had my own hot blonde tutor I wouldn't have gotten a C- in trigonometry.) 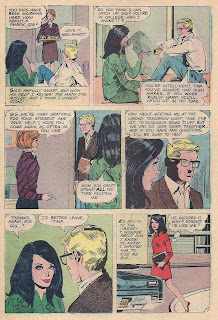 On her way to meet Gig at the library, Tina once again runs into Fevvy and his dedicated hag. Of course, since trouble seems to follow Tina everywhere, fists must fly. And with Tina's help, Gig finally gets to kick a little ass too. 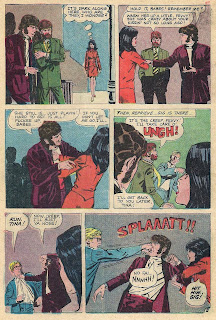 After escaping together, with emotions still running high, Gig and Tina admit their feelings for one another. And Tina finally gets that kiss that she probably still sees as her due. 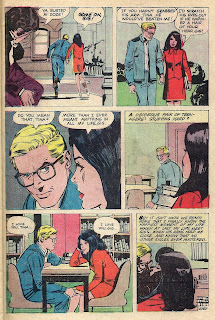 And, as it should be, the smart guy gets the girl. It probably didn't hurt that he was also hot.

In my opinion there really does needs to be more smart blonde men in romance comics. They should also all be built like Aquaman. Splish-Splash!
Posted by Spectergirl at 11:11 PM