If you read comics you know the bitter sting of disappointment. Be it scooping up that issue of Superman's Girlfriend Lois Lane whose cover, yet again, boasts the much anticipated matrimony of the titular character or all those issues of Batman whose cover's featured the death of Robin. (Well, except for that one time.)

Reading Romance Comics is no different! Bitter "Cover Disappointment" runs rampant. Like a man with a sock down his pants, appearances are not always what they seem.

Today I am going to share with you three prime examples of covers that make you think the inside story is going to totally kick-ass but that, in the sad light of day, is just another loser who doesn't look nearly as much like Cary Grant as you thought he did at last call. 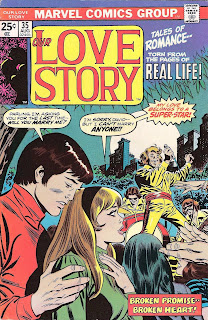 Oh, I know what you are thing, "Quick! To eBay!" but please don't jump the gun here. This good looking cover by John Buscema is like a slap in the face. In "And So We'll Be Married!", an actual "As Told To: Stan Lee" feature, our leading chick IS NOT in love with some yellow jump-suit wearing dork with a red sash tied around his thick middle. Nope! She is only at a Woodstock style hippiefest where the only band shown is too far away to see. There is no "Super Star" infatuation. 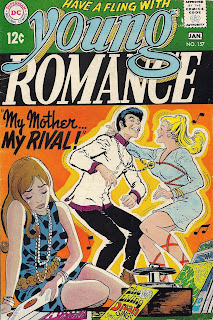 Damn! This looked like a great one. Sad, crying daughter, hussy of a mother both competing for a scarecrow of a man with a white Nehru jacket and, possibly, a black pompadour. But no, this Nick Cardy cover is a complete lie.

The mother is actually a dignafied redhead with a cute bob of a hair cut, an adorable button nose and a pair of respectable flats. The boy in questions, a clean cut blonde whose wardrobe seems to consist of only turtle-necks, v-neck sweaters and slacks.
The pain of this particualer disappointment was acute. 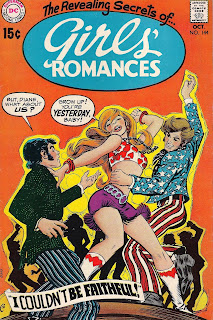 If stealing my 15¢ isn't enough, what exactly DOES Nick Cardy need to do to get arrested? Kill a man? Needless to say, in "I Couldn't Be Faithful" Diane COULD actually be faithful. And NEVER does she dance with a young Uncle Sam.

As with any hurts, the pain of disappointment does heal but, as it should, it leaves you a bit jaded.

Remember: Books should be judged by their covers, NOT comics.
Posted by Spectergirl at 10:59 PM