If I said you have a beautiful body would you read this novel I have been working on? 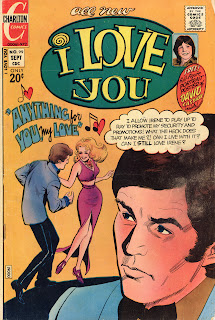 There's More Than Tears!
Charlon Comics
I Love You
Art by Fred Himes (as Ezell)
Number 99
1972

Girls (and guys) if you have never shown up at a boyfriend's place only to have a ream of paper shoved into your hands with a request of would you mind reading this? you've obviously made better romantic choices than I have.

Men always seem to want you to read something they've written, critic something they have painted or keep them company while they sculpt something or other. Or worst of all, pose. Something that simultaneously makes you love them and want to kick them in the eye. But normally these requests come after a certain getting to know you period, once they determine that you wouldn't mind. Of course they always come to the conclusion that you wouldn't mind, so the getting to know you period is of little use.

In There's More Than Tears! Bart Crofford doesn't give a shit how well he knows you, he's got a story to tell and your ass is going to hear it. 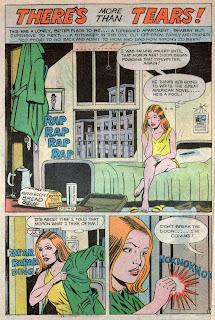 He's a fool! And you're a dream crushing bitch.

At Evelyn Ross' loud, bitter, insistent pounding, the door is finally opened. And, despite the fact that it is opened by a rather tall blonde with bedroom eyes and man of action sideburns, Evelyn can't seem to dial down her shrew. 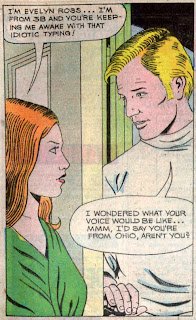 Bart explains to Evelyn that his day job at a car wash forces him to work on his novel late at night and, with Bart's gift of verbal seduction, it is only the work of moments before Evelyn is charmed into a little something Bart has been thinking about doing all day. 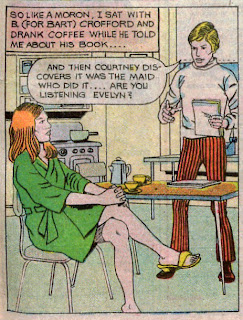 Since my husband works nights, I have a friend who comes over on Friday after I get my little ones to bed. We are supposed to either watch a movie or work on our various writing projects, separately but together. Inevitable it turn into this. Me sitting around in my husband's flannel PJ bottoms, rolling my eyes and telling him to shut the hell up, him dressed to the nines talking incessantly about whatever he is working on. 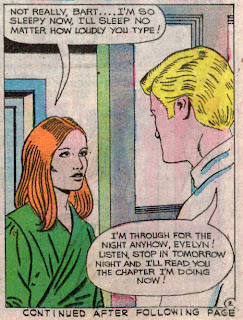 Evelyn is wearing the exact look I would expect that offer to elicit.

Despite all outward appearances, there does seem to be a little bit of a spark between our two lonely apartment dwellers. 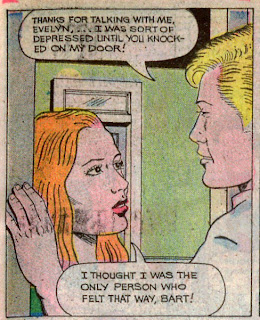 And Evelyn finds her mind wandering to thoughts of Bart. 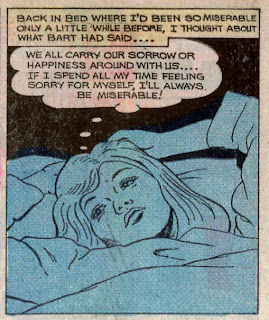 The next day Evelyn heads off to her hated job as a textile working still thinking about Bart. No doubt her seams will suffer. 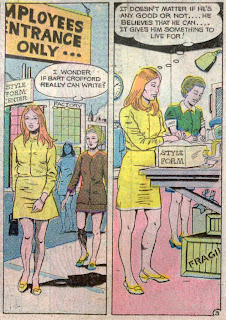 After work Bart and Evelyn run into one another in the hall and agree to have dinner together. And, because misery loves company, invite Mr. Shepulsky along also. 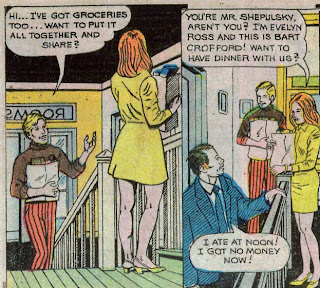 After dinner, once Mr. Shepulsky leaves, Bart asked Evelyn about her family. 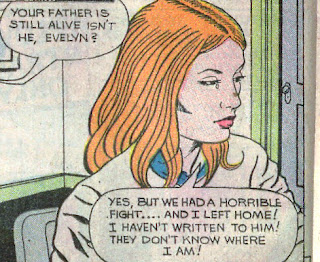 Bart tells Evelyn that not letting her parents know where she is isn't nice.  And he convinces her to write them a letter. Once she is ready to mail it, he walks her to the post office and then they take a romantic stroll. 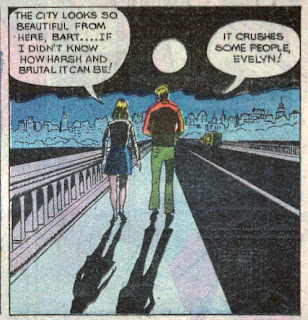 Good Lord. I wish their romantic stroll was to a pharmacy to pick up some freakin' Cymbalta. 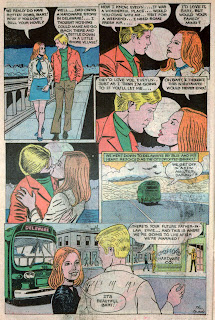 He's father is waving and appears to be happy to see his son. Clearly he has forgotten what a complete downer Bart is.

There you go, a happy ending for all. (Except for possible Mr. Shepulsky.)

Romance - The way you like it!
Posted by Spectergirl at 10:00 PM