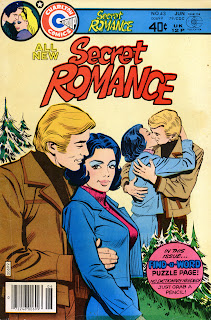 I know what you gentlemen are thinking ... Hey! I'm as much of a man as the next guy!

Sorry boys but compared to Clete Andrews you just started your period.

Time and time again Charlton Comics has shown us that they know women. In Reckless, this time around they prove beyond a shadow of a doubt that they know real men. And how!

Adrenaline junkie and child of privilege Clete Andrews is very likely the sexiest man to grace the pages of Secret Romance. He is certainly the hottest man to ever vacation at a luxury hotel in the Caribbean. And no doubt Anne Moultrie thanks God he was there because without him, she would have unquestionably been just another victim of... 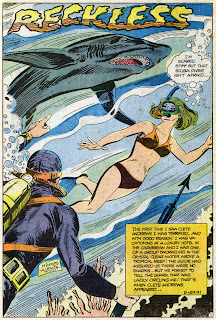 With Clete on the scene, Anne is able to make her escape, thus leaving Clete Andrews to do what real men to best. 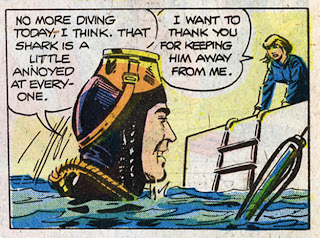 Especially since Clete no doubt tea-bagged him.

At dinner that night, looking oh-so-fine in a dinner jacket, Clete tells Anne about his life of manly excitement. 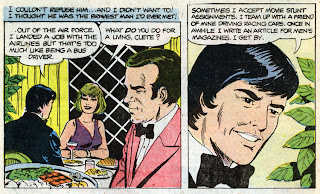 On occasion I also donate blood and testosterone to the Red Cross.

Sorry, I just can't see this black hair god going for little Miss Ash-blonde over there. But it could just be jealous talking.

But Anne's attraction of Clete has her over stepping the bounds of someone he has know for less then a week.

And Clete gets pissed. 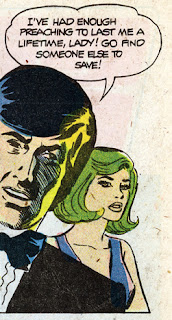 Looks like someone isn't getting felt up on the hotel couch tonight.

Despite Clete's anger, or maybe because of it, Anne can't stay away. And, on a whim, finds Clete in the hotel's casino on one hell of a roll. And ready to take one more roll of the dices. 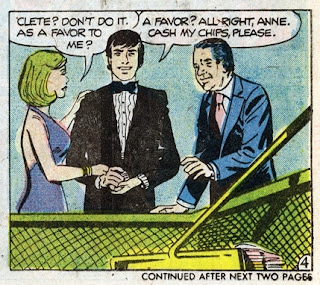 And because there is just something about a man who has no qualms about bumming money off his parents... 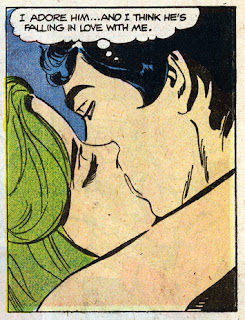 But that night Anne's dreams tell her the truth. 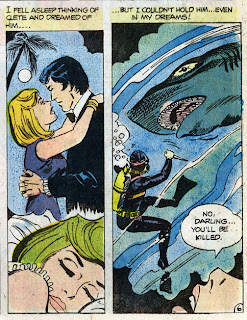 Like the ferocious shark that brought them together,Clete Andrews was not a man easily caged.

A fact proved the next morning when he skips town. 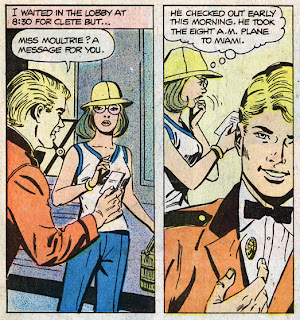 All too soon Ann's vacation comes to an end and she returns home, thinking to never see Clete Andrews again. Until ... 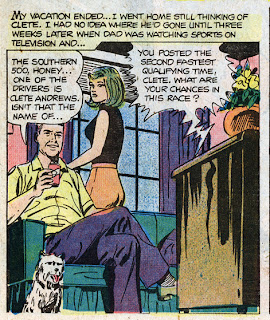 Clete Andrews. Isn't that the name of ... the guy who was kicked out of the hotel hot tub with you?

Of course, Anne is unable to turn away. 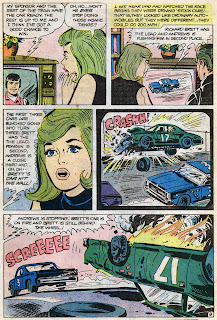 And, if only to cinch his total hotness ... 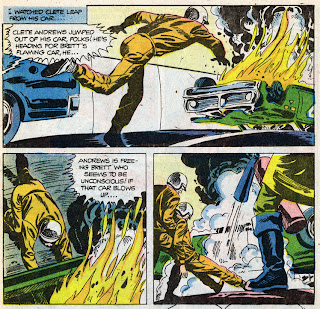 Wow! I think I might even have a crush on him. The Adventure People looking jumpsuit and helmet are no doubt helping. 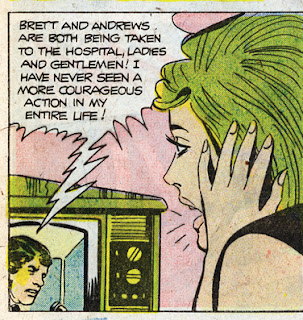 With this news that Clete is in the hospital, Anne feels she must see him. 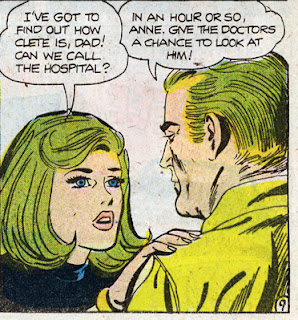 And, not deterred in any way by the fact that Clete all but dumped her at the hotel when he check out leaving only a note behind, Anne buys a plane ticket and heads out immediately to see him. And discovers that sometimes if you want to cage something wild you have to break a few bones. 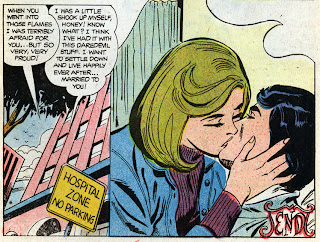 How's that uterus working out for you boys?
Posted by Spectergirl at 11:43 PM