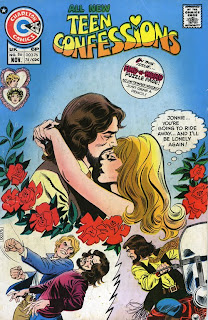 If you've been experiencing a dull ache in your chest (without arm numbness) it is very likely the void left by life without Jonnie Love. Few things outside of war (or possibly a pregnancy scare) can have such a lasting effect.

Somehow a plan for 12 weeks of Love has dragged out to more than a year and I supposed I owe poor Jonnie an apology. So I wanted to make it up to him with this very special and, most probably, final Hump Day with Jonnie Love.

This Hump Day truly stands out, and not just because the girl who owned this comic back in 1974 ALSO owned a Sharpie, but because this time around Jonnie has Marriage on his mind.

Blonde and in a bikini is just Jonie Love's type, no matter how much conflicted comes along with the package. And who can fault him? We all have our weaknesses. I, for one, have always found nothing more attractive than a mop of blonde hair on something tall and broad. So, when I met my husband and that package also came along with smart, funny, comic reading and a bit of a shoe fetish, it was well worth the singular You're Such a Slut I received from a friend who had already called dibs.

In my defense dibs becomes null and void after several months of not having the balls to make your move.

So the question is, will Jonnie find love worth the fight? Or will little old commitment phobia rear its ugly head? 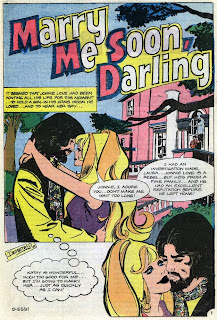 Yes, Jonnie Love has finally found the women of his dreams BUT we are getting way ahead of ourselves. First, lets start from the beginning. 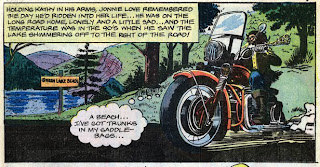 This time around Jonnie Love has ditched the helmet and is riding himself a majorly upgraded hog. I'm guessing that if his previous shitty little Honda was able to inexplicably draw him to the hottest blondes found in Mexico or on the closest beach, this bad boy is bound to have the ability to magically transport him to Sweden where I can only assume that Alexander Sharsgard look alikes and their female counterparts litter the countryside.

But there is no need to travel that far because luckily Green Lake Beach has what Jonnie is always looking for. 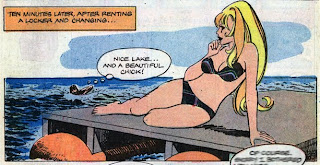 Of course Jonnie is quick to make his move but the bathing beauty will be having none of it. 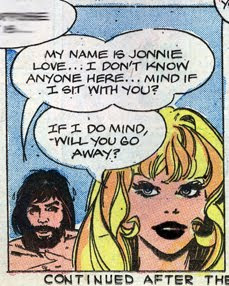 Oh, who is she kidding? No woman can resist our Jonnie Love! 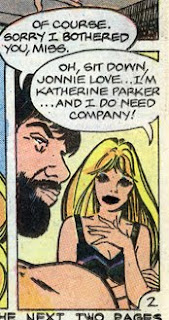 Blonde, Bikini'ed and in need of company? It appears that the new bike was well worth the price of the upgrade. 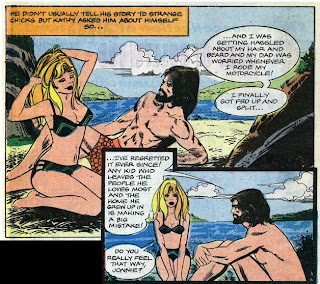 He didn't usually tell his story to strange chicks but Kathy asked him about himself so... Really? You expect us to buy that? I'm willing to bet that story is your version of small talk at the laundry mat.
So, after Jonnie' s tale (a tale that at his age should really be getting a little embarrassing to tell) and a lot of tell-tale hair touching and back arching on the part of Katherine, Jonnie is invite to her parent's house. Could a steak dinner be far behind? 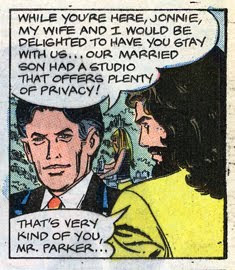 Why do father's seem to want to throw their virginal (okay, so I am being generous) daughters at this man? He must really smell good or something. 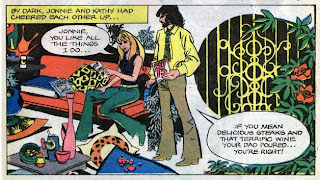 After Jonnie and Kathy bond, over what appears to be a love of kitch, flares and Roy 73, Love makes them its bitch. 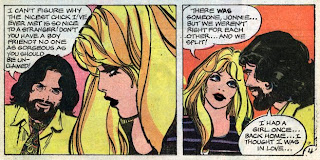 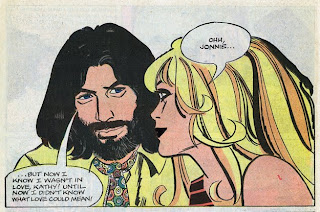 And, worthy of a musical montage, the next day Jonnie mows the family's lawn, has tea with Kathy and her mother, is invited to a soiree and plays some singles tennis at the tennis club.

Everything is going wonderfully until Jonnie runs into a little trouble at the club house. 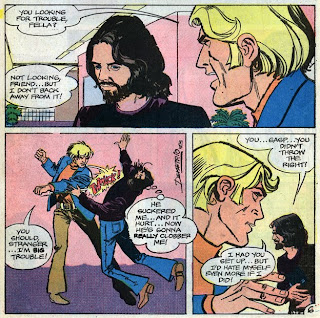 Count yourself lucky complete stranger with absolutely no reason to feel bitter toward Jonnie Love. If there had been a pool around Jonnie would have shoved your ass in so fast you wouldn't know what happened until you were being greeted at the gates of hell with a lung full of chlorine.

After a life time of physical altercation too numerous to count Jonnie shakes the attack off easily enough. And later at Kathy's parent party that evening Jonnie and his new woman steal a few moments together in the kitchen.

And, despite the fact that her father asked Jonnie to stay with the family, giving him use of a studio that offers plenty of privacy, he seems a little surprised at the resulting hookup.

But what was that? Could poor Jonnie be only a rebound for the recently single Katherine?
No, of course not. Even while Kathy's ex stops by the party to speak with her parents, Jonnie Love promises himself to the woman who has grown to mean more to him than going home to his family, and seals this promise with a kiss. 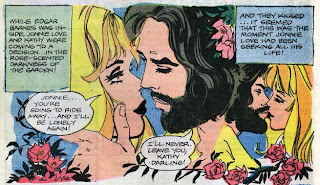 While they truly like Jonnie Love, Kathy's parent's fondness for her ex has them conflicted. And, like all parents, they are totally up in her business. 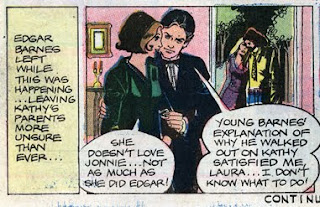 Sadly, it seems that once Jonnie offers himself to the love of his life, he quickly notices a distancing between them. 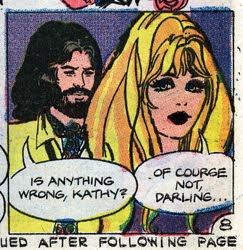 Soon Jonnie Love's respect for authority figures has him speaking with Kathy's parents and formulating a plan. 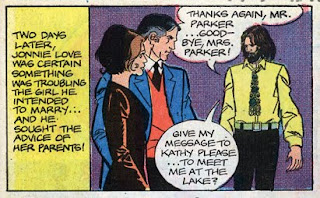 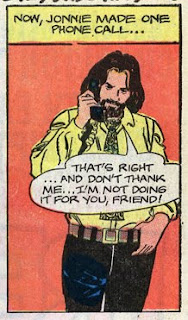 Once both Kathy and Edgar met at the beach with no Jonnie in sight, his plan becomes obvious. 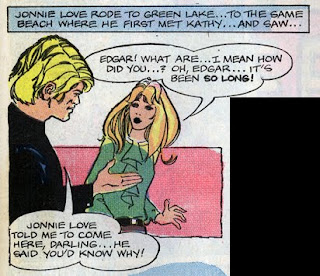 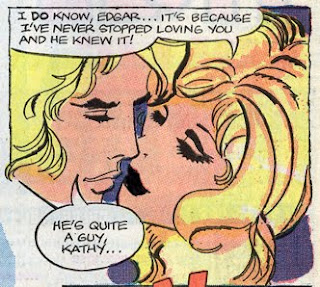 There is something about Edgar's expression and the way he says He's Quite a Guy, Kathy that makes you think that he may be kissing Katherine but his is thinking of Jonnie. Why exactly does that seem SO extremely hot? I'm not sure what that says about me but I'm sure it speaks volumes.

Or was it because he likes to watch?

Though sometime in the future I may do a side-by-side comparison of the Women of Jonnie Love, this is very likely it for me and Jonnie. At least for now. If I eventually track down the couple of Charlton appearances that I have yet to find you'll be the first to know.

Goodbye Jonnie L♥ve. Stay sexy.
Posted by Spectergirl at 12:01 AM