The most EXCITING Hump Day ever! 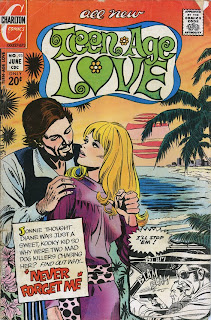 Don't let the awkward shoulder massage on the cover fool you, this is the most action packed Jonnie Love story to date!

In Never Forget Me we catch up with Jonnie Love on his ceaseless journey home - this time in sunny Acapulco! Damn, that boy needs a compass.

Long trips give a person time to reflect. Time to reflect on their past, their present and their future. And Jonnie Love's own reflections only help solidify he desire to return home. Nothing can stop him. 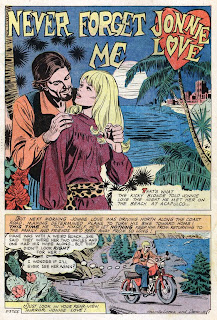 For Jonnie Love women are trouble. And when his thoughts turn in the direction of Diane it is enough to distract him from possible death by vehicular homicide. 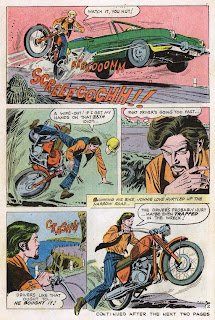 Did Jonnie Love just curse?
After the initial road rage subsides, Jonnie goes to see if he can help. 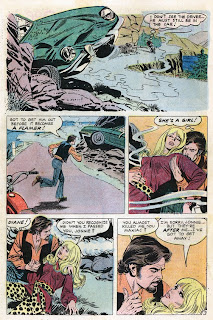 "She's a girl!" What gave it away Jonnie? I'm going to guess her huge rack. 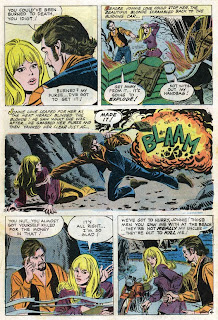 Not sure if he actually believes all Diane's drama, Jonnie still throws her on the back of his bike and takes off. But it isn't long before he realizes Diane is not exaggerating. 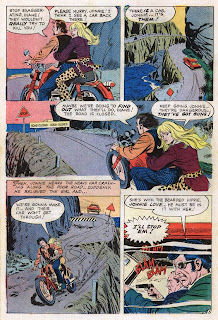 Wow, that's a huge step up from a thug wearing a Nazi helmet.

Once it appears they are in the clean, Diane's hunger apparently overcomes her and she begs to stop. 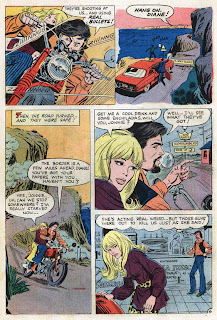 Thank God that King Kastle Hamburgers (Home of Hamburger) was there.

Jonnie, of course, is no fool. And realizing that women can't be trusted, he watches Diane's every move. 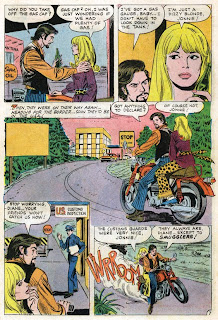 "I'm just a dizzy blonde, Jonnie!" He's heard that one too many times.

Back out on the road, soon the Mercedes of death is hot on their heels! 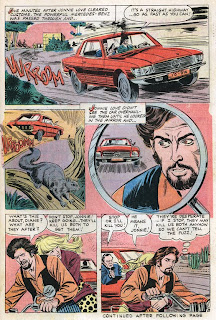 Squirrel! (Make sure to check out Sequential Crush on Squirrels in romance comics!)

Death or capture seem the only alternatives but Jonnie Love is more than just acquainted with the art of running way. And knowing where you're running to is half the battle. 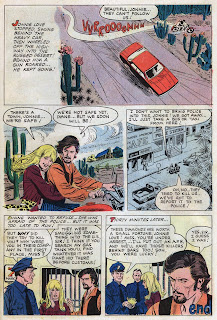 Like he said, nothing was going to stop him from getting home this time. Not even a beautiful woman with more than enough money in diamonds to buy him another outfit.
Posted by Spectergirl at 4:00 PM