Sometimes your parents were right. 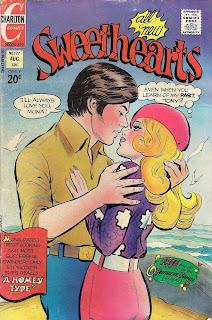 Some stories are universal. Whether handed down as oral tradition, painted on the walls of a cave, or rendered with all the skill of a last minute submission to your middle school literary magazine. They are still as true today as they were in our distant past.

Today I bring you a little something from that latter category.

Time for a Change! is the universal story of the struggles of growing up. The hope and heartbreak as we endeavor to find our own identity, our true calling, awaken our passion and meet our destiny head on.

Oh, and for the recorded. The dad is completely right.

Melissa is a high school girl just starting to blossom into adulthood. Starting to come to terms with who she is - a girl with hip friends, groovy threads, and a reputation as a cool kid in school. 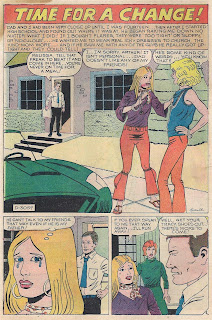 Maybe it is my age showing but if I had child hanging outside my house with a boy who looked like that, I would call him a freak too and send him packing. Also those flares are like two threads away from camel toe.

After her father reads her a letter he has received from her teachers regarding skipping class and another letter about unpaid parking fines, he takes matters into his own hands.

He forces her to dress like her mom and forbids her use of the car. 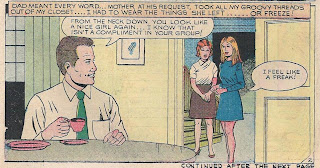 No car means Melissa is forced to spend the entire day at school. Without the option of skipping class she faces the daunting task of catching up her homework. A task that seems too overwhelming until Dennis Hart, a boy who I must assume has suffered a tragic accident in which the vertebrae at the base of his neck was damaged, offers to help. 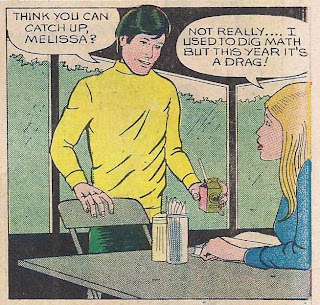 Dennis then comes over to help Melissa with her school work wearing a green sports jacket. Despite the obvious choice of "gettin' some" attire, Melissa's dad does not seem to notice and welcomes him into the house. 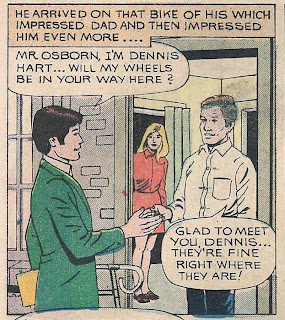 It isn't long before Melissa can proudly tell Dennis, while he is on his undersized unicycle, that she has finally worked her math grade up to an A. 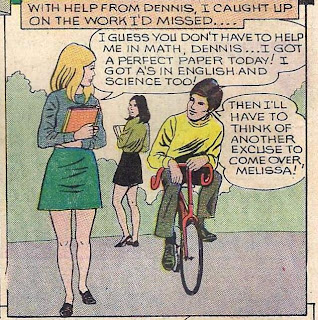 And despite her her matronly clothing, Dennis finally asks her out.

When Melissa goes to ask her dad if she can date Dennis, she tell him what every father wants to hear. That he was right. 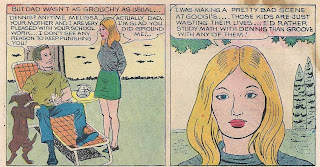 Still on a high from his daughter's admitting that she was wrong, Melissa's dad offers Dennis the keys to his car to take his underage daughter to the drive-in.

Obviously sensing a trap, Dennis turns it down flat.

But since Dennis is wearing the matching slacks to his green "gettin' some" jacket, how could it not end with a kiss. 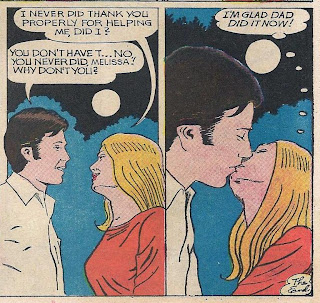 Hopefully the future holds a life of happiness, a bike with two wheels and a chiropractor.
Posted by Spectergirl at 10:30 PM