Oh food, is there no problem you CAN'T solve? 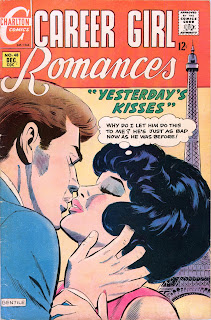 So that you won't mistakenly think that Marvel had a monopoly on understanding the modern career girl, Charlton Comics gives us Career Girl Romances and one of my all time favorites The Eyes of Love.

In The Eyes of Love we are thrown into the life of Roz, a model at the pinnacle of her career. Though she is one of the world's top paid models and considered one the world's most beautiful women, Roz can not help but shed a tear because the man she loves does not return her feelings. Rudi is her photographer and in fact doesn't seem to see the women he photographs as anything but product. He demonstrates this fact by casually telling one of his models that he can no longer use her because, as he so delicately puts is, "you're a cow now". How can you NOT fall in love with this guy? 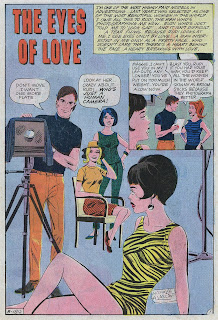 Upon leaving a photo shoot one day Roz confronts the man of her dreams in an awkwardly written conversation where she both praises him for his encouragement to better herself with speech, ballet and acting lessons (insert foreshadowing music here) and derides him for lessening her beauty in person by making her lose weight for the camera.

Wow! Could he be a bigger jerk? Yes, yes he can. 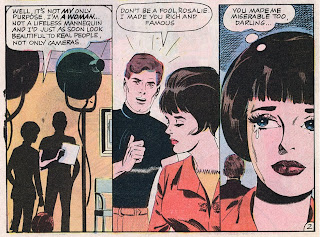 Later, while lunching with a far less attractive friend a handsome man approaches their table and to Roz's surprise the man in question tries to pick up her companion instead of her. For Roz, that is the last straw. 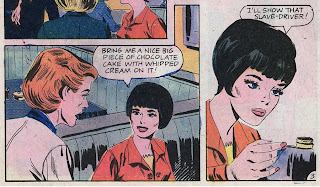 And she does show him, with a week of gluttony the likes of which has not been seen since Roman times.

Wow, looks like she is only 9 pounds underweight now. Good for you Roz!

When next she returns to Rudi's studio he seems to instantly take notice of her and tells her how nice she is looking. But after he develops that day's film all Hell breaks loose. 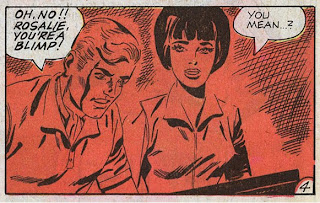 He tells her how she bulges and yells that she did it on purpose. And then goes into a tirade about the science that is photography. 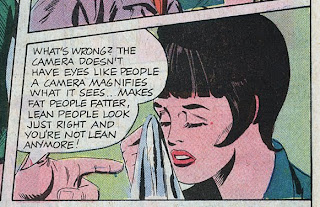 So Roz is out of the modeling business but all that "bettering herself" wasn't for nothing. She soon becomes a celebrity on the game show circuit. Then, while out for dinner with her producer she runs into Rudi where he explains his true feelings about her weight. 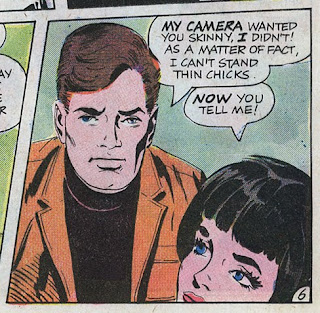 And about his true feelings for her. 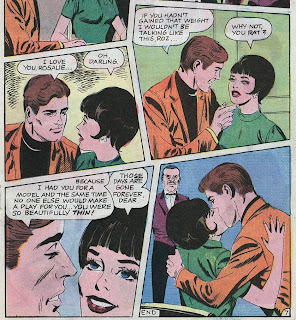 So Roz finally has the man she loves. Of course Rudi isn't the only love in her life: 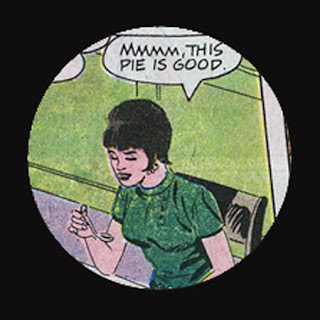 Posted by Spectergirl at 9:54 AM