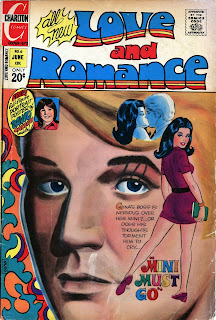 Well, with a less than easy pregnancy behind me (I'm all for the advancement of medical science but the Mayo Clinic should never play a role in your medical care) and our new addition well on his way to sleeping thought the night, kind of, I feel it is my responsibility to awaken the slumbering giant that is As Told to Stan Lee.

I figure after months of more "upscale" academic studies of romance comics, it's time to cut to the chase. Yep, we're talkin' sexual harassment - 1970's style!

Now I am sure there is not a girl out there who hasn't had her own brush with sexual harassment. Whether as the victim, the perpetrator, or at the very least forced to sit through one of those training films that teaches us the subtle difference between saying "Hi Roger, can I get you some tea?" and "Nicely tailored Chinos Roger, I'd like to find that package under my tree on Christmas day." So I have no doubt that this tale will speak to each and every one of us on some level.

With "Mini Must Go" we are introduced to poor Dan Childers. Just a working man trying to be all successful and important. But what he doesn't know is that he has already been targeted by the vixen Gina Tait, a devil in a brown belted jumper. 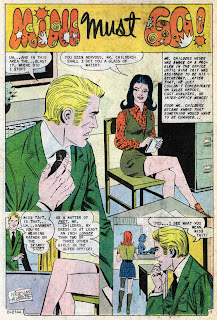 Since most women find nothing more appealing than a man with a Ken doll hair cut and a suit and tie, perhaps Gina Tait isn't the only devil in our tale, but since it's Dan's work that is suffering As Told To Stan Lee is more than comfortable placing the blame solely on our street walker from the secretarial pool.

Despite Gina's obvious attempts to seduce her boss, Dan tries his best to remain focused on his work. 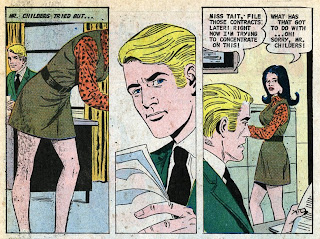 But his near Herculean effort is to no avail.

So, with sales reports, cost analyses and NOW even Gina's contract filing starting to suffer from Dan's constant state of arousal, he decides that there is only one thing to do. 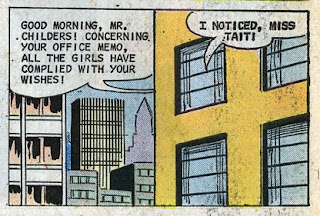 But what seems like a perfect solution to Dan's little "problem" and Gina's hooker appearance, turns out to be a disappointment all the way around. 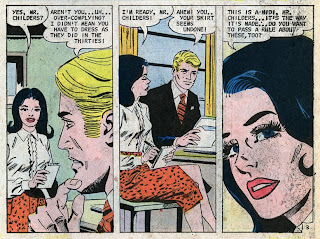 But it seems quite apparent the other girls in the secretary pool are not quite as adept at turning on their men.

Despite the fact that the other young, handsome and available men of the office begin to abandon the company like so many rats off of a sinking ship, Dan's desperate attempt to save himself overrides anyone else's concern. And, empty office or not, Dan finally starts to feel confident that he will finally be able to move out from behind his desk without feeling ashamed.

But it is too late. Like Pavlov's theory in action, Dan has already become the dog and Gina is most certainly the bell.

While Gina keeps her cool, Dan begins to crack. 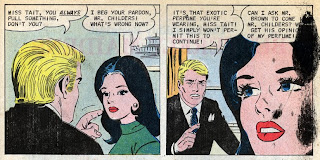 Gina, not wanting to be too obvious in her desire to make Dan feel completely uncomfortable and victimized in the workplace, announces that she feels they should no longer work together. 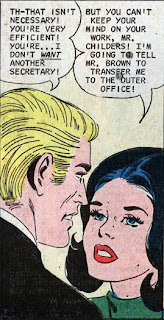 And while Dan is still feeling guilty, as if this has all been his fault, Gina plants the final seed for her inevitable pounce.

With Gina's transfer as his secretary, Dan feel comfortable enough to reverse his dress code change and the office goes back to the productive company it had been.

Until one fateful day when Gina again walked into his office. Gina had given him time, but like all sexual predators, she would have her way. 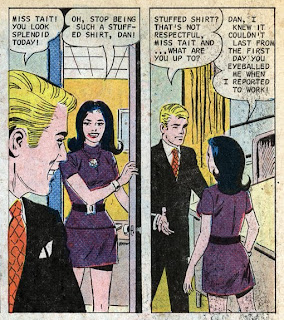 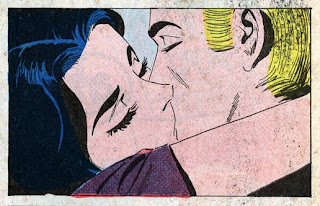 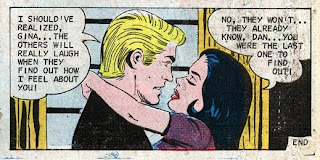 Thanks for joining me today and make sure to join next time for another in depth look at love and relationships. 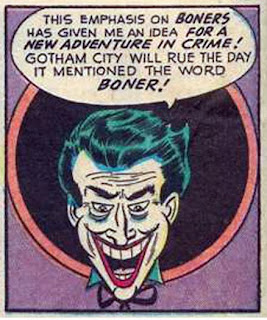